Women’s Rights activists, politicians and ordinary citizens celebrated the 100 year anniversary for women’s right to vote on a sunny Constitution Day in Copenhagen. But how did the celebration look through Egyptian eyes? The Egyptian journalist Fathia Eldakhakhny participated in the women’s procession in Copenhagen on June 5th. Here she shares her impressions. 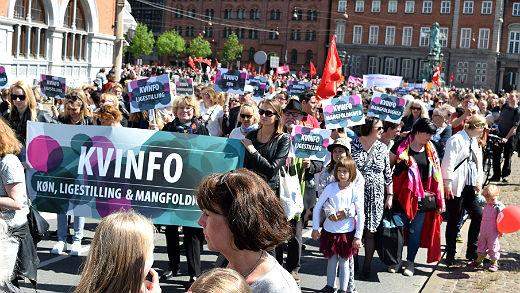 She was invited by the newsletter of the Danish Arab Partnership Programme to follow the constitutional jubilee celebration and the conference “Women in Politics” in the days preceding the anniversary.

Danish women refused to remain in the kitchen, preparing coffee for their husbands. Instead, women in Denmark struggled for more than 29 years in order to gain a seat in Parliament alongside the men. The fight for political representation began when the Liberal MP Frederik Bajer proposed a bill granting Danish women the right to vote. However, women’s right to vote was repeatedly refused, it was argued women were unfit for political activities due to their emotional nature. The women’s movement continued the struggle, and the adoption of the 1915 Constitution, which finally granted women in Denmark the right to vote, foreshadowed Danish women’s movement from the kitchen to the field of politics.
Not content with merely obtaining the right to vote, Danish women have now achieved 39% of the seats in Parliament. Danish women were among the first in the world to be granted full political rights. In 1924, Denmark made political world history by appointing the first female cabinet member but Denmark only witnessed a woman rise to the position of prime minister as a result of the 2011 parliamentary elections.

Egyptian women gained the right to vote in 1956, but has had limited success in penetrating the political sphere. In the last years before the 2011 revolution a quota had been instigated, which had lifted the women’s share of parliament to 12 %. But the quota was removed before the election in 2011 and this made their share fall back down under 2 %.

KVINFO cooperates with the Egyptian organizations Nazra and CEWLA (Center for Egyptian Women’s Legal Assistance) in projects that aims to strengthen women in the political sphere.

On 5 June 2015, a hundred years after Danish women obtained the right to vote, Danish women came out again in the Copenhagen streets in order to honour the centennial of their grandmother’s struggle. Women took to the streets dressed in white period clothes similar to those worn by their grandmothers, and they carried banners, which emphasised their hard-won freedom.
The women did not chant slogans, they did not dance or demand freedom in loud voices, they merely walked quietly while accompanied by police officers who oversaw the diversion of traffic. A young Danish woman led the procession, asserting the pride in her grandmother’s generation by carrying the 100-year-old banner of women’s struggle. Crowds of Copenhageners and tourists cheered the procession as if welcoming an army returning victoriously from the battlefield en-route to being crowned with the laurels of victory in the yard of honour.
In this case, the procession came to a halt before Queen Margrethe II in the Rigsdag Courtyard of Parliament. The Queen asserted the pivotal importance of the adoption of the 1915 Constitution as a significant step towards democracy in Denmark and shared a story from her grandfather King Christian X’s encounter with a woman’s delegation. One deeply moved woman declared: “Your Majesty, this is the happiest day of my life!” To which the King drily replied: “Perhaps you would do better by returning home and making coffee for your husband!”
“This small exchange neatly summed up the opinions regarding gender equality of the King and many other Danish citizens at the time”, the Queen declared, as many of the bystanders laughed at this antiquated point-of-view, now understood as jest since Danish women have proved themselves equal to their menfolk, their roles no longer defined as domestic coffee makers. Egyptian women, however, are still suffering from such unjust opinions and must still convince society at large that we are not simply created for a domestic role in the kitchen.
The women’s procession during the constitution celebrations are similar to the sight of Egyptian women and men standing side by side in Cairo’s Tahrir Square, chanting demands for freedom, democracy, and social justice, and fearlessly facing live bullets and tear gas. The Egyptian women have asserted their willingness to pay the price for freedom – alongside the Egyptian men – yet the Egyptian women are still not reaping the same rewards and political representation as the men. The same old discourse continues to refer to women’s inabilities and inefficiencies, claiming that her true role is merely domestic: At home and in the kitchen.
A hundred years ago, Danish women marched in the streets of Copenhagen celebrating a political victory – and they marched again today in order to assert their rights. Meanwhile, the Egyptian women, who stood side by side with Egyptian men during the revolution and the demonstrations, are still struggling.

Egyptian women have their sights set on the achievements of women in Denmark and elsewhere, dreaming of the day where actual equality – rather than merely equality by the letter of the law and the constitution – enables them to become MPs, Prime Ministers, or perhaps President instead of their current coffee-making role.
English language editing by: Maria Zennaro