In the Arab world, there is a tradition of men supporting the women’s rights struggle. Three men from the Middle East and North Africa explain why they are in engaged in the Arab struggle for equal rights. And why this is a pivotal struggle at a time when extremism sets the agenda. Photo: Jens Juul. 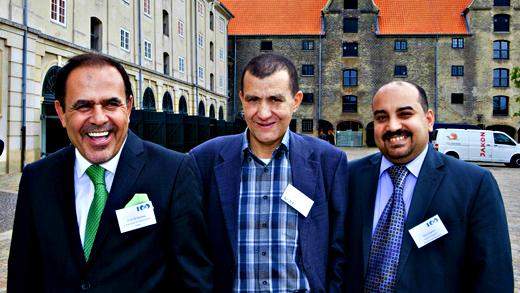 Al Quds Center for Political Studies is an independent think tank in Amman, Jordan. The Center was founded in 1999 and endeavours to analyse and interpret the democratic challenges facing the Arab world. Al Quds Center for Political Studies promotes freedom of speech and extending popular political participation. Women’s equal social and political rights is central to the work of the think tank.

Oraib Al Rantawi is founder and director of the think tank. He is a journalist and previous editor of a range of publications in Jordan and the author of several books about the Israel-Palestine conflict and democratic transformation in the Middle East.

– In Jordan, women constitute 52% of the electorate, but without the quota system they would never be able to elect even a single female candidate. Even with our quota system women’s representation is at a mere 12%. In education, women constitute 50-52% of the student body but women’s participation in the workforce is below 13%. How can we expect to create growth in society if half of the population is stuck on the sidelines? How can we promote social progress when this problem remains?, asks Oraib Al Rantawi with a slight tone of despair.
Oraib Al Rantawi is a political analyst in Jordan and founder of the independent political think tank, Al Quds Center for Political Studies. The Center promotes an analytical approach to the challenges posed by the processes of democracy and political reform in Jordan and its neighbouring Arab countries. One of the Center’s main programmes focuses on women’s political participation. They have recently concluded a major training programme aimed at women active in Jordan’s political parties and a new training programme for 120 women who are active in local politics is launched in July. Furthermore, the Center promotes gender mainstreaming of the electoral code and the family laws.
–  Our goal is a modern state and a modern political system. Gender equality is essential to this goal. If you want an index of any given country’s development, you only need to look at the level of gender equality. This is essential to our reform process. We cannot transition to a democracy without the women, he adds.
Oraib Al Rantawi has never experienced any negative responses to his work as a man supporting women’s increased participation in society.
– This is not about being a woman or a man. You are either in favour of our work or against it. I am supported by both men and women and I experience opposition from both genders, too, he explains.
However, Oraib Al Rantawi sees the increase of extremist Islamism as the largest threat to democracy in Jordan, including equal rights for women. The Islamist propaganda is propagated from the Gulf states to the entire Middle East and North Africa through social and broadcast media. This has caused a change in public opinion, which Al Rantawi does not recognise from his own upbringing in Jordan where his female classmates at university did not wear the headscarf and moved freely.
– At the moment we are faced with an extreme challenge from the extremism on the increase in neighbouring countries. How do we face this extremism without empowering women in order to render future generations immune to these ideas? Women have faced serious setbacks from the extremist wave of Islamism. Women are forced to dress in a particular way, they cannot leave their homes after 10 p.m., and they are faced with many social limitations. This affects their participation in politics and the work force, and this is all justified by religion. It would be easier to come up with a remedy to this situation if it was merely a political issue, explains Oraib Al Rantawi.

Centre des Droits des Gens (CDG) is a national human rights organisation founded in 1999 in Morocco. CDG runs two counselling centres for women and children who are subjected to violence, they offer legal assistance, education on human rights issues, and run a training programme for women in politics.

Jamal Chadi, the director of the human rights centre, Centre des Droits des Gens (CDG) in Morocco, shares Oraib Al Rantawi’s concerns regarding the rise of extremist Islamism.
– We have made great advances with respect to gender equality in Morocco, not least through the reform of our family laws. But the Arab Spring also brought Islamism. The Islamists do not believe in women’s rights. They do not believe in human rights. They support the death penalty and oppose women’s abortion rights, and they believe men are superior to women due to God’s will. We have been pushed back to how things were 40 years ago. Right now, we must focus on regaining lost ground before society can once more move forward, explains Jamal Chadi.
Despite the setbacks, Jamal Chadi continues his work as a human and women’s rights activist. To him, it is a single struggle.
– Human rights are also women’s rights. Violence against women, which is a huge problem in Morocco, is also a breach of human rights. As is a situation where half of the population is unable to work, have no rights, and are unable to participate in the social development of the country, says Jamal Chadi.
CDG has introduced gender parity in its administration. This entails equal representation of both genders in all the offices and agencies of the organisation. According to Jamal Chadi, the organisation must mirror the fifty-fifty percent composition of the surrounding society.
His views are not necessarily shared by all Morrocans, and he is often met by opposition simply for being a man engaged in the struggle for women’s rights.
– In Moroccan society, most people are against women’s equal rights. They find it odd that I as a man promote women’s equal rights and they pose many questions. Due to the stereotypes flourishing in our culture and some interpretations of our religion, people are convinced that men are superior to women – socio-economically, culturally, and politically. But we cannot have a situation where only women struggle for women’s equal rights, while men fight for men’s rights. Everybody in favour of a modern state based on the rule of law has to take a stand against the extremists who oppose women’s rights, says Jamal Chadi.
Jamal Chadi is on a weekly radio programme where listeners call in asking questions or commenting on equal rights issues. Not all callers are favourable, but they are all entitled to a careful reply to their questions. Because civic education is, according to Jamal Chadi, an indispensable part of the organisation’s work. Particularly, as a means to engaging Moroccan men in the dialogue.
– In collaboration with KVINFO, we are currently developing an educational campaign targeting Morrocan men. We are also working with women, e.g. capacity training etc. but it is impossible to work for women’s equal rights without including the men. Women’s rights are breached by men and we must try to understand their behaviour, says Jamal Chadi, who would like to include equal rights in the national curriculum of Moroccan schools.

The Entire Egyptian Society Must Be Included

CEWLA is an Egyptian NGO founded in 1995 with the aim of defending women’s human rights in Egyptian society. CEWLA offers legal aid to women and organise women’s rights education. Politically, CEWLA works for gender equality with a focus on legal equality and anti-discrimination. Azza Soliman is co-founder and member of the board at CEWLA.

Sherif Gamal describes himself as a man who did not always understand the necessity of placing women’s rights on the agenda. Today, he is director of the programme promoting women’s political participation at the NGO, Center for Egyptian Women’s Legal Assistance (CEWLA), in Cairo, Egypt. Sherif Gamal has personally experienced a radical change of heart.
– I used to find it odd that men campaigned for women’s rights. I did not think it was any of their business. But when I started working for CEWLA, I witnessed some of the problems and suffering faced by women in Egypt and I experienced a veritable paradigm shift. It completely changed my whole way of thinking and made me realise that women’s rights is a social problem, which affects all aspects of society. And the entire society must contribute to finding the solution to these problems, simply because the entire country stand to gain from resolving these issues, explains Sherif Gamal.
As long as women’s rights rests uneasily on shaky foundations or are simply non-existing, women need the men to be on their side, says Sherif Gamal.
– Women only constitute one half of the solution. Men make up the other half. In Egypt, you find men harassing women in the street, men who breach women’s rights. So, it is important to me to be the other kind of man, the kind of man who favours women’s rights. The kind who helps and supports women in claiming their rights, says Sherif Gamal when explaining his own involvement.
Like the male activists in Jordan and Morocco, he would like to see an increase in the number of men who struggle for women’s rights.
– We often educate women on their rights, but in the end these women are surrounded by men: fathers, sons, and husbands who don’t support women in obtaining their rights. So, it is important to get through to the men in order for them to understand that women must have their rights too. We try to engage in a dialogue with these men. We ask them why they oppose women’s rights, and we try to explain how the support for women’s rights is not at the expense of men’s rights. Men are not disenfranchised by women obtaining their rights.
Sherif Gamal blames the media and their representations of women. Egyptian soap operas, which are very popular, in particular promotes a negative narrative where women’s rights undermine men’s rights.

CEWLA’s work has not been made any easier by the political upheaval of the past four years and the ever-increasing control faced by NGOs. Yet Sherif Gamal is optimistic, not least because of the younger generations. They are more in favour of equal rights and, he believes, they will overcome the current backlash in the country.
– We are very different from Europe, from Denmark, where women’s rights are consolidated. We are still struggling, and it is important for men to be a part of this battle, he concludes.
English translation by: Maria Zennaro