20 politicians and activists from four Arab countries were invited by KVINFO to follow the Danish local elections in November 2017. Here they participated in local candidates’ campaigns and studied the election process and vote tallying. The meetings were inspirational for the guests as well as for the Danish politicians they met; many good and fruitful discussions about gender and democracy took place. Here’s a collection of photos and reactions from the visit. 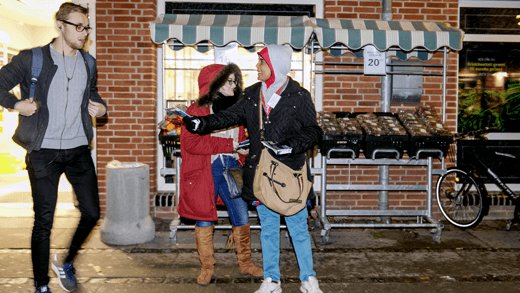 In the morning they handed out election material for at candidate from the upshot Feminist Initiative – in the afternoon for the right-leaning and very established party ”Venstre”.
But then party affiliation was not the point of this visit from 18 women and 2 men from Egypt, Jordan, Tunisia and Morocco.
The point was to follow local candidates for the municipal elections in Copenhagen and Frederiskberg municipalities and experience how such a campaign is run in Denmark.
One of the candidates who received the Arab group was Lai Balsig from the party Venstre in Frederiksberg. 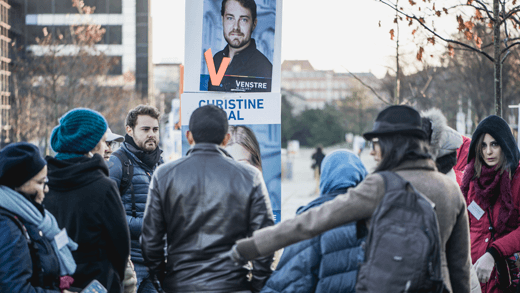 The 18 women and 2 men from Morocco, Tunisia, Egypt and Jordan were invited by KVINFO to follow the local elections in Denmark in November 2017.

The study trip was a part of KVINO's programme under the Danish-Arab Partnership Programme. One of the goals of the programme is to secure equal access to political participation for men and women in the Middle East and North Africa.

Besides Venstre’s flouresent V his poster also sports a rainbow stripe to signal his support for LGBT rights, he told them.
This drew a wave of questions. The Arab women were already confused that a party which calls itself liberal and whose name translates as “left” is actually a right wing party in Denmark. That right wing and rainbow flags go together was very far from their political reality.
”In Tunisia a lot of people will not even vote for women candidates,” Dorsaf Hmaied said. She is a candidate at the upcoming Tunisian local elections on an independent list in the small coastal town where she lives.
She was one of the candidates for local political office that KVINFO’s Tunisian partner LET (Ligue des electrices Tunisiennes) had selected to take part in the study tour to Denmark. The participants were other politicians and activists chosen by KVINFO’s partners in the four countries. 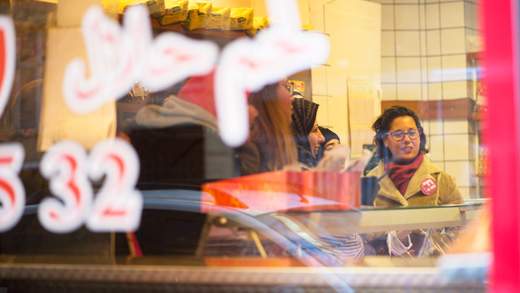 The same morning the other half of the delegation was campaigning with Muneeza Rosendahl from ”Feministisk Initiativ” – running as a new party in this election. As part of her election campaign she was doing outreach in the immigrant heavy neighborhood of Nørrebro, contacting local shop owners with her messages, including equal opportunities for ethnic minorities.
Several of the shop owners in the area are of Arabic origin and the women embarked on energetic persuasions on behalf of the candidate.
”They are extremely good ambassadors”, Muneeza Rosendal said exitedly, as the whole group entered a large candy store and picked up an animated conversation with the man behind the counter. He turned out to live in Sweden with no right to vote in Denmark – but he had family and friends who had. 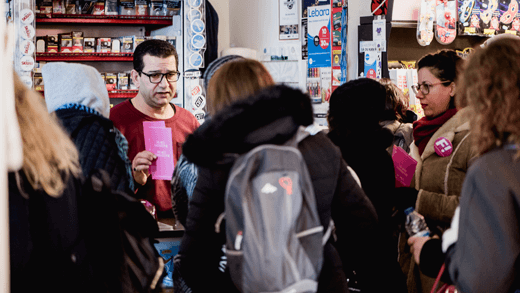 The previous day was a slightly more orderly affair in the hall of the municipal council in rural Lejre, about an hour’s drive out of Copenhagen. Here Grethe Saabye from the conservative party had assembled five local women running for different parties for a meeting arranged by the Danish Women’s Council. 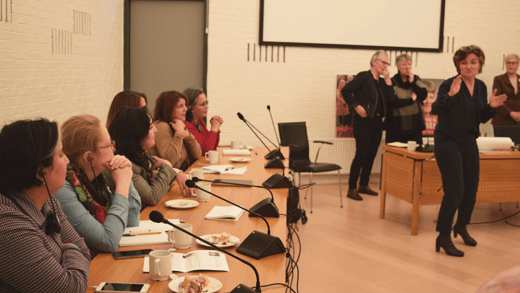 In Lejre only one out of five members of the municipal council are women – well under the national average which is close to 30%. Because of this the female candidates had joined up to participate in the Danish Women’s Council’s campaign “Elect more Women.” They told the Arab guests about the campaign and also got a good talk about the conditions for women in politics, how to balance it with family obligations, the attitude from some of the male politicians and more.
The cooperation across party lines they saw here and in several instances was one of the elements that surprised many of the Arab participants. Following Lai Balsig on the street, the politician from Venstre, he corrected a poster from a politician from a competing party that had folded, and told that the parties in Frederiksberg had made an agreement to look after each other’s posters when they were out campaigning. The reaction was mumbles of disbelief.
On election day this cooperation is institutionalised and even more evident. At the polling station in the great hall of the Copenhagen City Hall the group met the experienced conservative politician Susanne Møller, who was head of the election there. 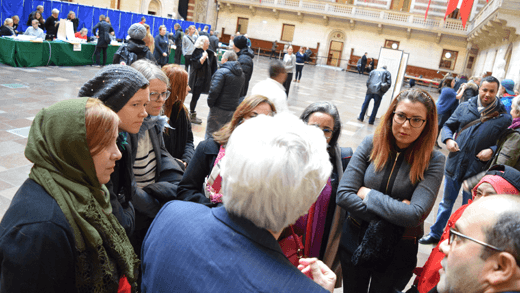 In their countries of origin it is an election committee or other civil servants running the election processes. The politicians are not let anywhere near the polls. But at City Hall and later at a polling station in a sports venue in the suburban municipality of Lyngby, the Arab guests met a mix of political representatives and municipal civil servants.
One of the questions was which party affiliation the present civil servants had and the local representative got some skeptical looks as he said he did not know and that this was usually the case. 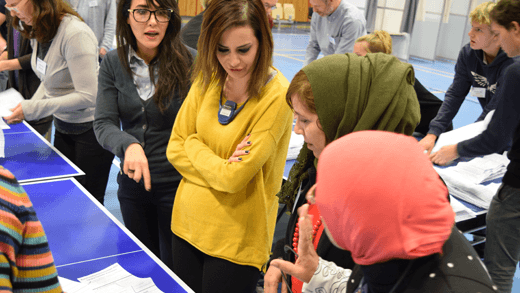 After the local head of the election had rung the bell to close the elections, ballot boxes were unsealed and vote counting commenced on the rolled out ping pong tables.
”This is similar to Tunisia. Except that here you can vote personally for a candidate and not just for the party. We don’t have that,” said Dorsaf Hmaied as she pointed to the ballots. In Tunisia the candidates are ranked on the party list and the top candidates are the ones who are elected according to how many seats the party gets.  To ensure a fair representation the Tunisian parties have to list men and women alternately, and in the municipal elections scheduled for March they also have to run women on top of the lists in half the municipalities. 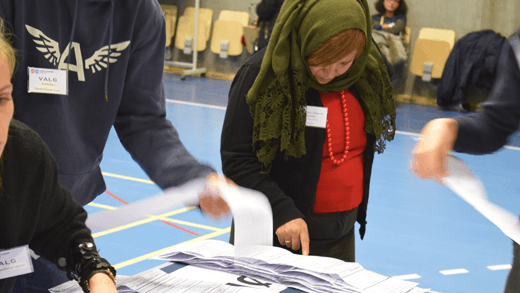 As the votes were tallied in Lyngby it became clear that here a woman top candidate would be the winner of the election. Fasel Alsubiat from Jordan could see the pile of votes for conservative mayor Sofia Osmani grow higher and higher. But amongst the party officials from all parties doing the counting there was only good-natured teases in spite of some of the other parties loosing badly.

Niels Bak Henriksen is head of press liaison at KVINFO. He is trained as a journalist and has previously worked at the foreign desk at Danish Broadcasting.

”What? – here’s a personal vote for you. I can’t believe it” one of them shot across the table, prompting laughs in return, also from the Arab guests, as the interpreter translated the joke.
The visit in Denmark provoked many thoughts and not just for the guests. Both in Lejre and for the politicians they joined on the campaign trail, meeting the Arab women was inspirational.
”It’s wonderful to experience the large interest in democracy and enthusiasm for running for political office in spite of many local challenges,” Lai Balsig said after the day of campaigning with him. “The pleasure was very much on my side.” 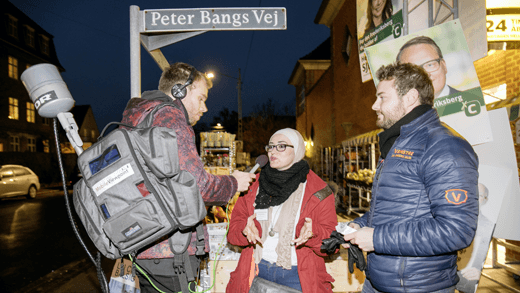 The media also noted the Arab delegation and Wajd Al-Shamayleh from KVINFO’s partner Jordanian Women’s Union was interviewed along with Lai Balsig for the regional radio P4 Copenhagen on her impressions of the election campaign and the visit.

There are large differences in how developed the local democracy is in the four countries that were represented in the group. In Jordan the responsibilities of the local bodies elected earlier this year have been expanded, Morocco has had local elections for decades and Tunisia is preparing for its first true democratic local elections next March.
Mohamed Yousry from Egypt has worked for a number of NGO’s on women’s rights and other topics and he plans to run in the next local election in Egypt – when and if it is comes, as the political situation in Egypt is uncertain. But on election night in Denmark he was in the middle of it and he snapped a quick selfie from the vote tallying. 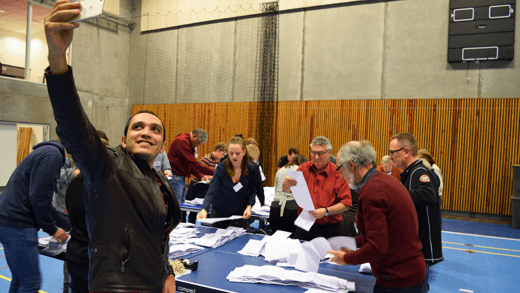