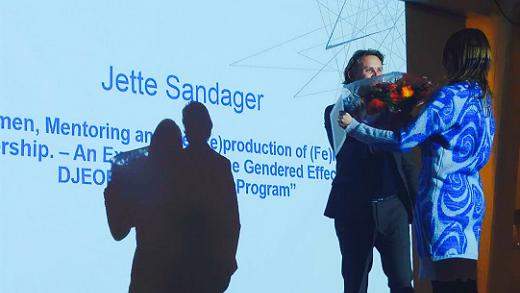 Jette Sandager, who is working on the development of KVINFO’s Mentor Network, has been awarded the “Thesis of the Year” award at Copenhagen Business School, CBS. She receives the award for her thesis ”Women, Mentoring and the (re)production of (fe)male leadership” about the potentials and pitfalls in mentoring programmes.

KVINFO congratulates her with the award. The award committee has the following motivation:
”The thesis analyses the social and political effects of DJØF’s Talent Mentor Program initiated with the purpose of enhancing diversity in leadership of public and private organizations. In an extremely convincing manner, the thesis shows how although the mentor program may succeed in helping more women become leaders, it also reproduces a set of highly stereotypical gender roles and expectations, ultimately failing to bring more diversity to the understandings and practices of leadership.
The thesis is exemplary in its identification, re-framing and investigation of a general and highly pressing societal problem, namely the lack women in the top echelons of organisations.
Through a substantial knowledge of and impressive ability to combine gender studies, post-structural analytical strategies and current theorizing on affect and emotion, Jette Sandager offers a directly usable and highly valuable contribution to present attempts of private and public organizations alike to enhance the diversity in leadership.”
We much agree on the usability of her conclusions here at KVINFO. They are currently being implemented in KVINFO’s Mentor Network, where Jette Sandager works.
If you want to read more about mentoring and the potentials of the method for bringing more women in leadership, you can borrow the thesis at KVINFO’s library.