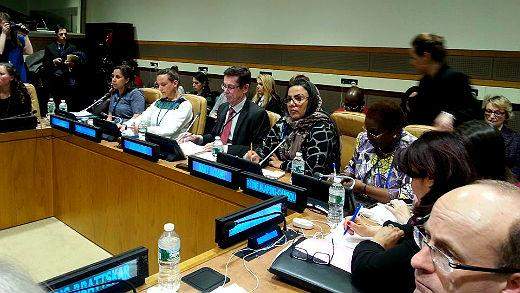 Many women have paid a high price in their fight for their rights in the Middle East and North Africa. In their defence of a variety of rights they have paid with their physical safety, their liberty and even their lives. In a context where societal violence and infighting is increasing, women human rights defenders have been targeted by state and non-state actors.
In response KVINFO’s Egyptian partner Nazra for Feminist Studies have been instrumental in forming a new regional coalition: Coalition of Women Human Rights Defenders in the Middle East and North Africa.
“We are a group of women who believe in the tremendous power that comes from feminist coalitions and from the passion that drives women human rights defenders,” the founding statement says.
The coalition has been underway for a while but it was formally founded in February, and was launched at this week’s meeting in the Commission of the Status of Women (CSW), says Katarina Blomqvist who as head of KVINFO’s international department is attending the CSW meeting  in New York.
Here Mozn Hassan from Nazra was discussing the situation for women human rights defenders, underlining the need for international support.
“Despite all that we and other activists in the region are facing, we vow to continue working on the rights of “women human rights defenders” and to include these women in our coalition, so that women’s voice remains a revolution,” the coalition’s founding statement closes.
Read the founding statement of the Coalition of Women Human Rights Defenders in the Middle East and North Africa