Defiance and unity in Tunis 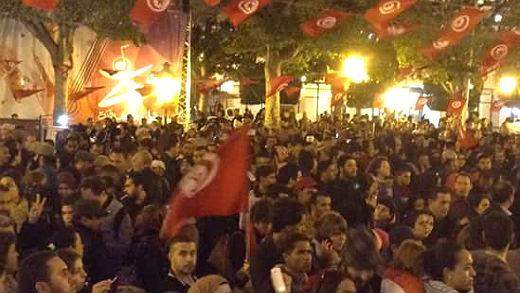 The attacks on the Bardo museum in Tunis yesterday which claimed 21 lives,  has provoked a clear and consistent reaction from the Tunisians.
As the attacks were still going on people started gathering in front of the museum chanting “We are not afraid.” Shortly after a video emerged of a group of parliamentarians huddled on a staircase where they had been brought to safety from the attacks on the museum next door. Religious and secular members side by side they are defiantly singing the national anthem.
Later in the day the crowd outside grew into a demonstration with thousands of people, lighting candles and waving flags. The Tunisians have fought hard for their democracy and they stand by it.
“KVINFO would like to express our strong support to the Tunisians in their struggle against the forces, who want to end democracy. A struggle we will continue to back and a struggle we have a firm belief that they will win,” says director of KVINFO Nina Groes.
That the most extreme forces are also present in Tunisia is sadly no news to neither us here in KVINFO or to our Tunisian partners. Anyone who witnessed president and founder of LET (Ligue des Électrices Tunisiennes) Besma Soudani take on a couple of salafists in Copenhagen, when she visited the municipal elections campaign in 2013 will know that this is a fight which they know all too well – and are prepared to take.
As tragic as the events in Tunis are, the reaction also shows the strength of the Tunisian society and the unity across differences of opinion, which is at the foundation of any democracy.
See the parliamentarians singing the national anthem while huddled in the parliament building