In the Danish towns of Hillerød and Aarhus, Tunisian and Moroccan women have held open crochet and embroidery workshops, inviting Danes to try their hand at these intricate handicrafts. KVINFO presents a photo reportage from the events. 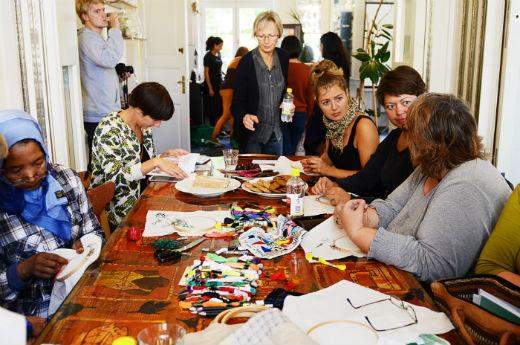 Facts about the projects in Tunisia and Morocco

Since 2008, KVINFO and the KADK design school have been collaborating to support women producing handicrafts in Morocco through a network of co-operatives.

The project has not only involved training the women in developing their designs and techniques, but it has also taught the women about production, quality control, bookkeeping, marketing and other topics in the field of business operations and entrepreneurship.

Based upon this first project, a second project was launched in Tunisia – this time involving partners and participants from the Moroccan project as the main resource and driving force.

In the autumn of 2013 similar workshops were held in Silkeborg and in Copenhagen.

Read more about the project on our home page

Or read the web magazine article about the project from January: Setting up a sustainable base takes time

This autumn, Tunisian and Moroccan partners from KVINFO’s joint project with KADK (The Royal Danish Academy of Fine Arts Design School) shared their expertise with Danish handicraft aficionados at workshops held at the Women’s Museum in Aarhus and Klaverfabrikken in Hillerød.
At the events, the Danish visitors – under the expert guidance of the team of dedicated tutors – were able to try their hands at crocheting, embroidery and so-called passementerie, otherwise known as the art of making elaborate trimmings and edgings such as tassels and pompoms.
On top of learning all about these specialist handicrafts, visitors to the workshops also learned how the Tunisian and Moroccan women were benefitting from the project and they gained an insight into the current challenges these women – and women in general – are facing in their home countries.
The café at The Women’s Museum played host to the first workshop held outside Copenhagen. The 40 participants ensured that the café was packed to the rafters and kept the Tunisian and Moroccan instructors very busy. Before taking their workshop to Aarhus, the Tunisian and Moroccan women had held an equally well-attended workshop at Copenhagen Municipality’s Taste the World street festival. 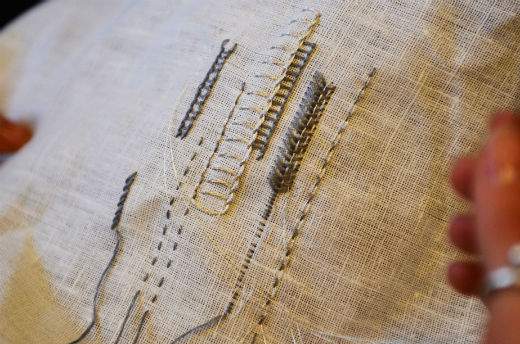 The aim of the workshops was to aloe visitors to try out – and learn – as many new techniques as possible, so that they could take them home and use them in their own embroidery, crocheting and other types of handicrafts. Pictured is a ‘tester’ being worked on by one of the participants. 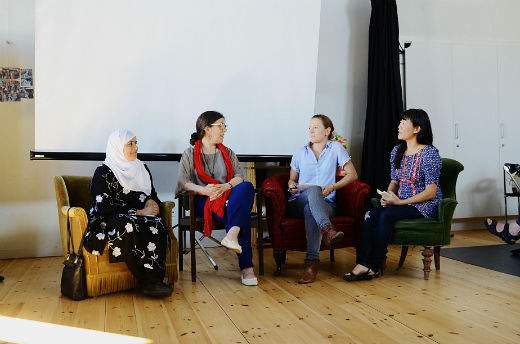 Both in Hillerød and in Aarhus the workshops kicked off with a short, live interview. During this interview, the RFA co-operative in Marrakech and Asma Ben Mabrouk from Tunisia’s ASAD organisation explained about the experiences and benefits of the project and talked about the challenges faced by the women in their home countries. At one event – just as the interview was drawing to an end and when the otherwise patient women in the audience were about to indulge their quivering fingers – Assiya Gourra insisted on spontaneously commenting upon the many other benefits brought about by the collaboration between KVINFO and the KADK design school.
Since the setting up of the joint partnership in 2008, women from Moroccan co-operatives have met on a regular basis with students and staff from the KADK design school in an ongoing development of the Moroccan women’s skills – both in terms of artistic expertise and business acumen.
“In addition to the specific benefits gained by those running the businesses and those producing the handicrafts, I think that there’s another important thing this project has achieved. For a woman who has never been outside her country – most likely never having travelled outside the town or province where she was born – this collaboration with foreign partners and the opportunity to travel abroad and exhibit or sell products has a much more far-reaching importance. It means that her daughters will probably have the opportunity to do the same, and that she will raise and encourage them in directions she would otherwise never have done”, explained Assiya Gourra. 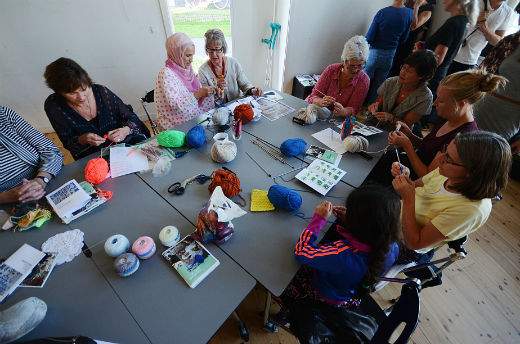 In Hillerød, too, many people flocked to the event – so much so that Birgit Rømer, who was responsible for the event at Klaverfabrikken, had to set up a waiting list and ultimately had to turn many would-be participants away. 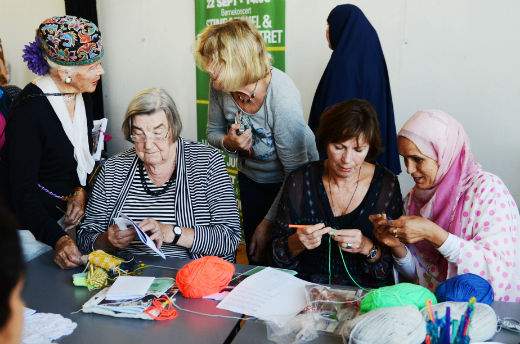 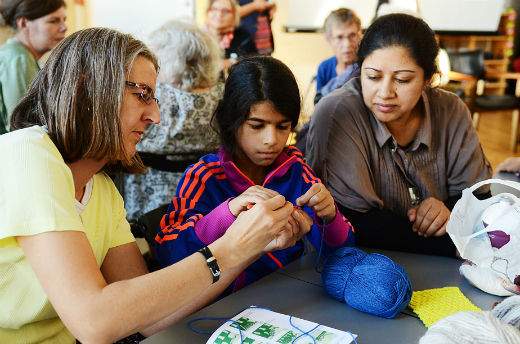 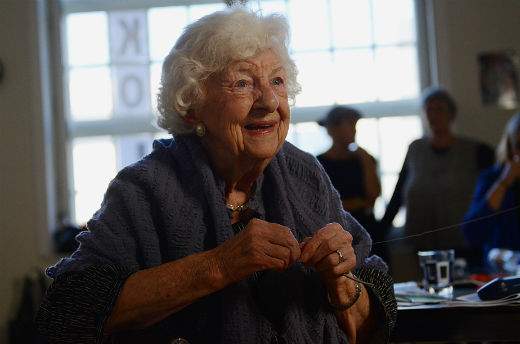 A broad cross section of ages and several generations of the same families took part in the workshop. Concentration levels were high. 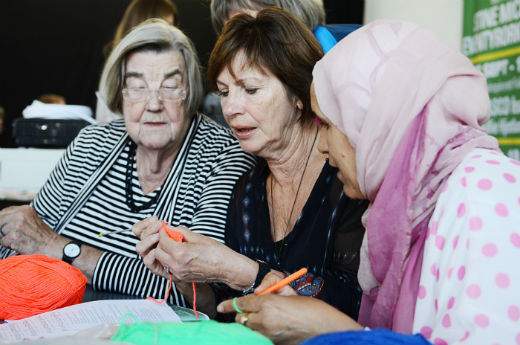 Tunisian crochet is not difficult – particularly if you have already mastered the technique of regular crochet. The beautifully coloured thread made learning even more of a pleasure. 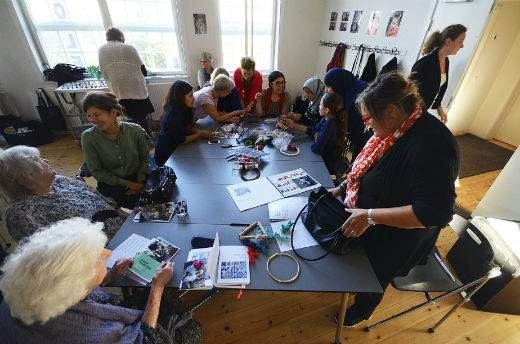 Another technique taught was a type of coiling or wrapping. Here, shiny yarn in matching colours is wrapped around, for example, a plastic hose, thicker yarn or another object, the result being a colourful bracelet, necklace or pen. 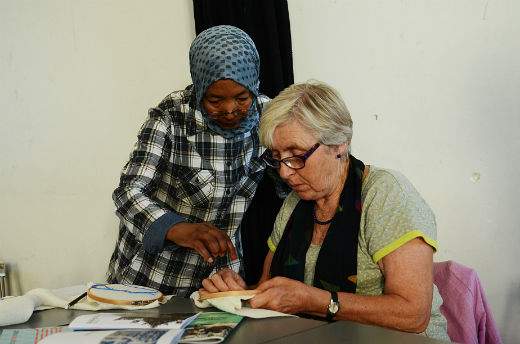 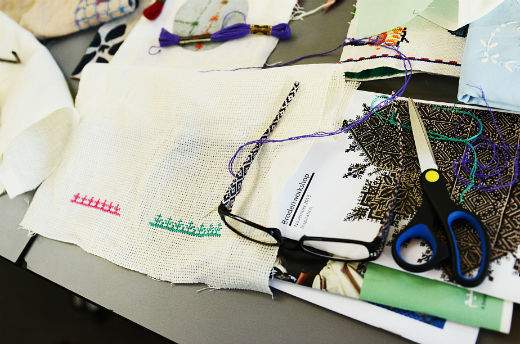 At first glance, Moroccan embroidery looks a lot like cross-stitch. But upon closer inspection, the motifs and also the techniques are, naturally, quite different. This can be clearly seen, for example, when you look at the back of a Moroccan embroidery.