The post 2011-revolutionary hopes for a more equal society are running out of steam among the Egyptian women’s rights organisations. And yet they persevere. As they say, the situation must eventually take a turn for the better. 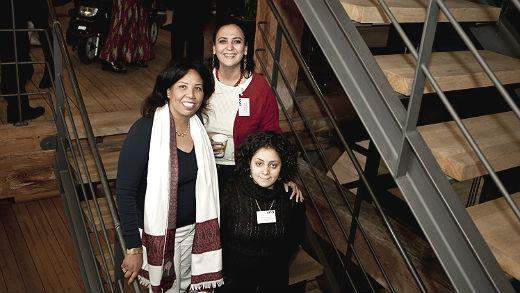 Four years ago, Nevine Ebeid Fahim did not want to leave Egypt. It was during the time of the Revolution, Egyptian women took to the streets participating in the demonstrations in Tahrir Square, and women’s- and human rights organisations such as the New Woman Foundation where Nevine Ebeid Fahim works as a programme coordinator, were finally gaining hope. This was a process she did not want to miss.
Today, she is restless and eager to travel, however the restlessness is tempered by a new fear. It is the fear of showing up at the airport only to have her passport – and by extension, her freedom – seized. A fear which is not unfounded.

The conference, Women in Politics, took place on June 3-4 2015. By focusing on women’s political participation in Denmark and internationally, the conference commemorated the centennial for women’s right to vote in Denmark.

The conference was co-organised by KVINFO and DIPD (Danish Institute for Parties and Democracy).

One of the other women’s rights activists who should have participated with Nevine Ebeid Fahim in KVINFO’s conference, Women in Politics, commemorating the centennial for women’s voting rights, never arrived in Copenhagen for exactly that reason.
During the week of the conference, the 23-year-old photojournalist, Esraa El-Taweel disappeared in Cairo. She is one of a number of – primarily young – activists who have disappeared during the spring of 2015. Esra El-Taweel later resurfaced in police custody, and she remains imprisoned – though neither charged nor judged in a court of law. 24 January 2015, the women’s rights activist, Shaima Al-Sabbagh, was killed by the police during a peaceful demonstration commemorating the start of the Egyptian Revolution on 25 January 2011.
The room for manoeuvre is constantly diminished for the pro-democracy activists in Egypt. The current regime, led by President Abdul Fatah Al-Sisi, has a reputation for severely repressing any forms of resistance and targeting the women’s- and human-rights activists.

The Current Situation in Egypt

Today, Egypt is a de-facto military regime headed by President Abdel Fatah Al-Sisi, the former chief of the armed forces in Egypt.

After the 2011 Revolution, the Islamist parties and candidates emerged victorious in the parliamentary and presidential elections. The Supreme Constitutional Court of Egypt declared the parliamentary elections null and void and suspended parliament. In 2013, the military under the leadership of General Abdel Fatah Al-Sisi deposed President Mohamed Morsi, who has subsequently received a death sentence.

In 2014, Al-Sisi was elected President of Egypt. His reign has been characterised by an increasingly harder stance vis-à-vis any form of political protest or critique.

After having already been postponed several times, parliamentary elections are scheduled for autumn 2015. In the meantime, the president maintains both legislative and executive powers.

We have met before. Nevine Ebeid Fahim from the New Women’s Foundation, Azza Soliman, co-founder of the Center for Egyptian Women’s Legal Assistance (CEWLA), and Salma El-Naqqash from Nazra for Feminist Studies, one of the recent organisations appealing to younger feminists in Cairo.
We met in Cairo in 2013, at a time when the women’s rights organisations were busy at work securing women’s rights in the new Egypt. This was a moment in time when, despite having to struggle against many set-backs, there was still a pronounced faith in a more equal future.
Hollow laughs ring around the table, when I mention this period in time. They would not be here, in Copenhagen, if they had lost their fighting spirit. But they’re exhausted too, and disillusionment is a constant companion now.
– I am very concerned with the current plight of women activists and their treatment in public spaces. We witnessed the shooting of Shaima al-Sabbagh and its aftermath. There is a very precise strategy of specifically targeting human rights and women’s rights activists. Public spaces are becoming increasingly inaccesible for them, explains Salma el-Naqqash.
Azza Soliman concurs:
– We are experiencing increased stigmatisation. Last year, I was shocked to find photographs of myself and a handful of other named activists published in the newspaper. They had even written the address of our organisation. It was a veiled invitation to assault us. This frightened me. I did not know whether I would be assaulted when walking in the street or shopping at the supermarket, she says.
Subsequently, the pressure of the regime has increased. Azza Soliman was a casual witness to the police shooting of Shaima al-Sabbagh in January, but when she wanted to depose as a witness, she found herself charged with participation in an unlawful demonstration. The case is still pending.


The Role of the Media

CEWLA is an Egyptian NGO founded in 1995 with the aim of defending women’s human rights in Egyptian society. CEWLA offers legal aid to women and organise women’s rights education. Politically, CEWLA works for gender equality with a focus on legal equality and anti-discrimination.

Azza Soliman is co-founder and member of the board at CEWLA. She has more than 20 years’ experience in working for women’s rights in Egypt.

The three women agree that a range of reasons make it increasingly difficult for women to participate in public and political life. The Egyptian constitution continues to lack a provision for women’s equal participation in political life, i.e. a long-awaited women’s quota on electoral candidates similar to the women’s quota in the Tunisian electoral law. Furthermore, women – lacking in the financial resources and the access to sponsors available to men – are finding it difficult to fund election campaigns.
All three organisations cooperate with KVINFO on projects aiming to improve women’s political participation through education, capacity building, and mentoring.
Essentially, the women are struggling against structural barriers to their participation. The sexual violence in public spaces, as seen during the popular demonstrations in Tahrir Square, and the general stigmatisation of women entering public life contributes to the limitations on women’s political participation.

NWF is an Egyptian feminist NGO, which began in 1984 as a study circle for women engaged in subjects such as democracy and social injustices. The circle slowly developed its current formation where the NWF works for women’s social equality at all levels of society.

Nevine Ebeid Fahim is programme coordinator and member of the board at NWF. She coordinates NWF’s program for women’s political participation.

– The level of violence, particularly sexual violence, in public spaces essentially limits women’s access to the public. This is a limitation, which presents itself in many forms of public participation: In political parties, as candidates and voters in the electoral process – all forms of public participation has become challenge for women, explains Salma El-Naqqash.
Azza Soliman describes the media representations of women who – despite the challenges – decide to take a stand politically as characterised by malevolent caricatures. The women are described as simple minded and devoid of leadership potential. They are sexualised, named and shamed as tarty.
According the Nevine Ebeid Fahim, the media representations make it difficult to see the scope for real changes.
– The media are guided by a narrative, which is not helpful to human rights activists or those defending women’s rights. Proponents of change are never heard. If one of us – or any other human rights activist for that matter – were to stand in the elections we would be attacked by the media. Every female parliamentarian will be made out to be a traitor and attacked by the media for not being loyal to our national values. In this way, the media rejects the very processes of democracy. They are neither interested in diversity nor in change, she explains.
The current media situation also renders it harder for existing movements to achieve and maintain popular support.

Nazra is one of the newer feminist organisations in Egypt. Nazra’s point of departure is the belief that gender plays a decisive role in political and social contexts and the organisation thus promotes gender mainstreaming in these fields. Nazra launched the Woman Political Participation Academy in 2011.

Salma El-Naqqash is the programme manager of the Woman Political Participation Academy.

It is easy to understand the exhaustion. And harder to find courses of action.
Are you losing faith in change?
– From my perspective, I cannot afford the luxury of losing faith. I do not feel that I have a choice. I must live in this country. The problem is that we have ended up very far from where we expected at our point of departure. We fought the Muslim Brotherhood, we wanted a democratic state. But at the moment we are left without options. We do not have a consolidated opposition able to offer an alternative position between the traditional regime and the Islamists. So the situation is comparable to someone swimming between two coast without being able to reach dry land, says Nevine Ebeid Fahim.
Despite the current situation, all three activists share a form of optimism. The situation simply cannot get any worse than this. Or it could. Theoretically, Egypt could undergo a process of extremist radicalisation similar to what has occurred in Libya. A religious backlash would render women and minorities even more vulnerable. However, the three female activists share a common faith in the inevitability of future reforms in Egypt.
– There is definitely a sense of fatigue among the Egyptian population. People cannot be bothered with the upcoming elections or any form of support for political parties. Most of all, they want political stability and economic progress. At the moment, I am not particularly optimistic concerning public spaces in Egypt, but I think a counter reaction will be unleashed if the attacks on activists and politicians from the opposition continue. The status quo simply cannot be maintained as is. So, I believe we will witness changes in the future. We will witness a process of democratisation and political reforms. At the moment, we are only able to operate within the field of legal reforms. We can push for further political reforms, says Salma El-Naqqash.
Azza Soliman underscores the essential nature of international support for the continuing processes of modernisation – not least with regards to women. She is also heartened by the new social movements. Engaged young people who are far less willing to compromise in their work for positive social change.
– Women’s situation in Egypt is getting worse. One the one hand, the revolution challenged various social taboos. Many women and girls decided not to wear the headscarf anymore. I am neither for nor against the headscarf, but I witnessed women making independent decisions concerning their own lives rather than simply adhering to the rules set out by society, culture, the family. We are now faced with a rather marvellous new generation of women. They are not as afraid as I am. They are fearless, like my colleague, Salma. They are not interested in compromise. They dare speak of LGBT-rights, something which has been wholly unthinkable for my generation, says Azza Soliman and suggests that the revolution is far from over. The revolution is a continuing process.
– We do not need a new revolution. Our revolution began in 2011 and we are still here. The situation goes up and down. But we must continue to create alternatives, says Azza Soliman.