Gender, identity and art in Casablanca 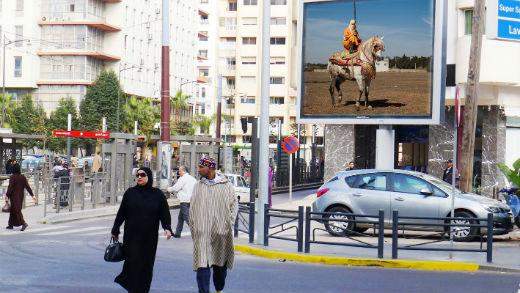 Today, april 1st, people in Casablanca has met a different looking city than yesterday. 63 woman artists from Morocco and Scandinavia have each occupied one of the numerous large billboards in the Moroccan city.
But CASABLANCA BILLBOARD FESTIVAL doesn’t just bring art about and by women on the visual forefront in the streets. During the festival there’s also a program of debates and performances. Aside from co-funding the festival itself, KVINFO has financed a debate taking place on Saturday about “gender, identity and art in the public shere.”
In the debate two artists and two art critics from Morocco and Denmark will use their impressions from the festival to discuss how art can interact with gender and identity, and how art can contribute to bringing a change towards more gender equality in a Scandinavian as well as a Moroccan context.  The panelists are the artists Gudrun Hasle and Rita Alaoui and the art critics and gallerists Yasmin Naji and Elisabeth Dahlin.
CASABLANCA BILLBOARD FESTIVAL 2015 is created by Danish artist Hanne Lise Thomsen. It is on display until april 15th.

Read more about the events under CASABLANCA BILLBOARD FESTIVAL