Gender, War, and Peace – A Conference Report from Beirut

The conference, Upholding Gendered Peace at a Time of War, presented an abundance of new research on the role of gender in processes of peace and war. KVINFO’s Connie Carøe Christiansen reports from Beirut, where researchers and activists discussed matters as diverse as female militias, jihadists, and suicide bombers as well as heroes and victims in the wake of the 2011 revolutions in the Middle East. 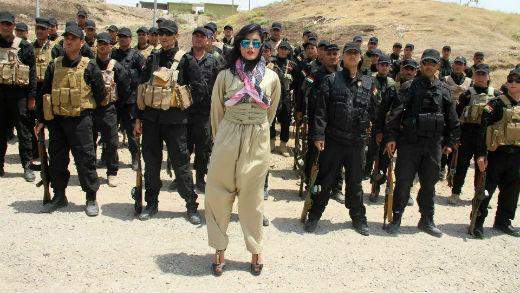 A host of researchers and activists met at the conference, Upholding Gendered Peace at a Time of War, in Beirut in order to discuss the ways in which women and men and their gendered bodies are molested, invested with symbols, and transformed during war and armed conflict. There is an overwhelming wealth of new research and concrete examples of the role played by gender during processes of war as well as peace.

The conference brought together a range of researchers and activists who discussed the role and conditions of women caught up in the conflicts in the wave of the 2011 revolutions in the Middle East.

The conference was planned by the Lebanese American University’s Institute for Women’s Studies in the Arab World (IWSAW). IWSAW is one of the leading gender studies institutions in the Middle East and KVINFO has supported parts of their activities for several years through grants from The Danish Arab Partnership Programme under the Danish Ministry of Foreign Affairs.

The Lebanese American University’s Institute for Women’s Studies in the Arab World (IWSAW) in Beirut planned the conference in conjunction with the organisation Women in War in Paris. KVINFO was one of the conference sponsors through a grant from the Danish-Arab Partnership Programme.

Islamic State in Iraq and Syria (Isis) and the Kurdish fighters – both male and female – are in the vicinity of Beirut, the site of the conference. And religious extremism is, as became abundantly clear at the conference, a firm friend of gender stereotypes.
Islamic State in Iraq and Syria reinforces their warrior masculinity by abusing Yazidi women and children, who are kept as slaves or subjected to rape. The syncretistic Yazidi religion is not recognised by Isis. According to Isis, the abuse is sanctioned by Islam.
In Europe, surprisingly, not only men but also also women, and French women in particular, are recuited to Isis through offers of marriage on the internet. The ”jihad” of these women is not constituted by participation in armed battle but through other forms of support for Isis.
Facing Isis are the independent Kurds, having built an entire new community based on a manifesto, the so-called ”jineology”, prepared by Abdullah Öcalan, the leader of the Kurds. Here, women participate on all levels of society – including battle. Clearly, this is a challenge to the male fighter from Isis who were raised in a culture of conservative gender norms. The conflict between Kurds and Isis thus goes beyond the mere struggle for land and sovereignty as opposed gender ideologies are a direct factor in the struggle.
Female suicide bombers are not an exclusively Islamist phenomenon. Here, women transform their feelings of powerlessness into the ultimate gesture, something which appeals to Shi’a and Sunni Muslims, Christians, and Druze in equal numbers, but which has also been a feature of national struggles. And female suicide bombers are awarded more symbolic capital than their male counterparts, explains Joseph Alagha, Haigazian University, during the conference.
Even without religious ”support”, gender stereotypes and gender ideologies are central to fomenting war. The symbolism is heavy and much too concrete when women’s bodies are equated with enemy territory, ripe for capture through rape. Narratives of rumours of captured women being raped by the enemy may restore the fighting spirit and is by no means a uniquely Middle Eastern phenomenon. The rape of women and men is a consequence of war, as witnessed in Europe during World War 2 and during the 1992-1995 war in Bosnia-Herzegovina, where the rape of women was a method to boost and increase the war effort.


Feminism and Nationalism: An Ambigious Partnership

Women fighting alongside their menfolk and even outperforming them during battle are, as suggested by the case of the Armenian women during the struggle for Karabakh (the disputed region claimed by both Armenia and Azerbaijan, transl.) and Kurdish women fighters from PKK, at best ignored or presented as exceptions to the rule after the cessation of warfare.

Connie Carøe Christiansen is researcher and programme advisor at KVINFO and was KVINFO’s representative at the conference.

Photo: The Kurdish singer and dancer, Helly Luv, is visiting pershmerga fighters in a bid to boost morale. Photo from Wikipedia Commons.

Several cases presented at the conference show that it is not merely a question of women creating peace and men waging war. This is underscored, among others, by the Palestinian researcher and activist, Rabab Ibrahim Abdulhadi. At the conference, she shows photos from social media depicting Israeli women who boost the morale of the Israeli Army by assuming erotic poses during the assault on Gaza in 2014. She also shows photos from social media depicting a female Israeli soldier posing in full uniform next to blindfolded male Palestinian prisoners of war whose hands are tied.
At the conference, it is made increasingly clear how gendered bodies are also active participants after conflicts, during the process where the wounds of war are healed, the opposing parties reconciled, and victims seek redress.
The tortuous road towards peace – or more peace – is different for men and women, with women finding it difficult to assume an active role.
After the popular uprising in Egypt, a female victim – or as it is named locally, a “martyr” – who was assaulted and killed en-route to Tahrir Square, was originally depicted without wearing the hijab among the male victims. Later, she is depicted either wearing the hijab, or her portrait among the other male martyrs is blurred.
Nationalism and feminism thus constitute an ambiguous partnership where feminism, on the one side, nourishes and reinforces the creation of nation states and, on the other side, poses a challenge to nationalism such e.g. when female combatants turn out to be more brave or resilient than their male counterparts.

The challenging of stereotypical masculinities, or hyper-masculinities, is a common denominator of the analyses and gendered perspectives on war presented at the conference.
Male pride is hurt, when women display masculine virtues such as carrying arms and facing the enemy alongside – and even surpassing – men, thereby challenging authoritarian rule in one’s own as well as the enemy camp.