Handing out Diplomas in Spite of Civil War 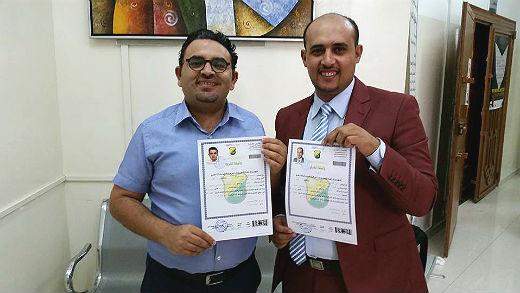 Bombs, civil war, exile and kidnappings are not every day events for most students. But it is at the master education in gender and development in Yemen, which KVINFO and Roskilde University supports. However the first students could still receive their diplomas this week.
One of them is Adel Salah, who proudly poses with his diploma together with a fellow student on a post on facebook. “Thanks to the management and the staff at GDRSC and also to Roskilde University in Denmark for their support and counseling,” he writes in the comments.
That the 16 students as well as the organizers of the education, the Gender-Development Research and Studies Centre (GDRSC) at the University of Sanaa, has made is this far is something of an achievement. Since the master course was first planned Yemen has gone through months of demonstrations, revolution, coup d’etat and civil war and for the last four months a coalition headed by Saudi Arabia has bombed the country in order to oust the Houthi militia from power.
In spite of this the university and the students have succeeded in keeping the education going. The same goes for the adjoining research library, also supported by KVINFO.
The diploma the students have received is not the final master certificate as they still are writing their thesis. In her speech the leader of GDRSC Bilkis Zabara praised the students and encouraged them to carry on with the thesis.
”It is an important and well timed encouragement that they now have an official diploma in international development and gender,” says Connie Carøe Christiansen, who was anchoring the cooperation creating the master course at Roskilde University and today works as a programme advisor at KVINFO where she is responsible for the project in Yemen.
”It is a topic wich is in high demand in the Yemeni development sector and the academic skills that the students are acquiring are necessary to secure that Yemen’s development is anchored in the local communities. With only one exception fortunately all the students have chosen to complete their Master and are now writing their thesis – but under very difficult conditions” she says.
The Danish contribution to the project is financed by the Danish-Arab Partnership Programme under the Ministry of Foreign Affairs. Roskilde University and KVINFO have contributed with knowhow such as training of professors and other staff at the centre, professionalization of the library, international contacts and teaching and counseling of the students.
Via Skype and mail Connie Carøe Christiansen is counselor for several students, among them Shereen Makawi, who has also posted her diploma on facebook.
”My thanks to our international and local professors, management of the university and my colleagues and all those who helped in the success to achieve the first step of the Master of International Development and Gender, in very difficult conditions experienced by our country,” she writes.
Shereen Makawi has felt those conditions more than any. As most of the students at the Master programme she also works for one of the international development organizations in the country. Together with a French colleague she was kidnapped in broad daylight in the middle of Sanaa back in February. Because she denied to let her separate from the French woman, she was subjected to torture which she still struggles to recover from and she was not able to attend the ceremony.
Others from the class have fled the country and are now writing their thesis from Egypt, Turkey or Malaysia. Only about half of the students were actually able to show up and receive their diplomas, but still the rector of Sanaa University, Abdulhakim Al-Sharjabi, participated in the ceremony. He not only praised the students, but also the GDRSC, which Sanaa University takes a lot of pride in and he noted that the woman researchers and professors working there have a good team work.
While the first class now only has to write their thesis, the course is still taking in new students. The fourth class has just started in spite of bombings, water shortage and lacking security.
“That the centre and the students succeed in keeping the education open in spite of a very difficult situation is very, very important,” says Connie Carøe Christiansen. “Not least because the education is aimed directly at the reconstruction which will come after the war. It offers hope for the present as well as the future.”