He for She – in Yemen: Ahmed bin Mubarak

As one of their first acts in their renewed assault on Yemen’s capital Sana’a the Houthi militias have abducted the president’s chief of staff Ahmed bin Mubarak. That he was their first target is not only rooted in his current position close to the presidency, but in his general work for a more democratic and inclusive Yemen – and not least for women’s political participation. KVINFO’s Connie Carøe Christiansen has written a portrait of Ahmed bin Mubarak. 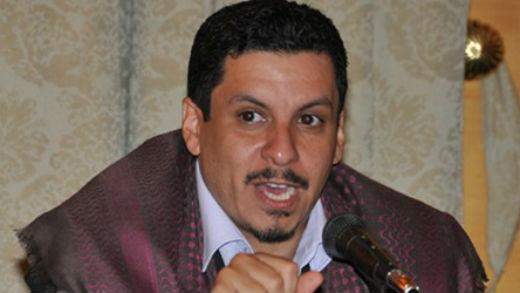 At the time of publishing Houthi militias have surrounded the Prime Ministers offices and it is unclear what the result of the stand-off will be. Ahmed bin Mubaraks destiny is unknown.

You can read more about the National Dialogue Conference here

On October 7th this year Ahmed Awad bin Mubarak served for only 33 hours as prime minister in the Yemeni interim government. He was nominated by decree from the Interim President Hadi, but had to resign again so quickly because the heavily armed Houthi movement, a tribal coalition originating in the Northern provinces, which now controls government and governmental institutions in Yemen, refused to accept him in this position.
Mubarak became known in Yemen – and especially among women activists a national celebrity – for his struggle for the inclusion of women and a gender quota during Yemen’s National Dialogue which he was heading for its entire term March 18th 2013 – January 15th 2014. In this position he also gained the trust of President Abdrabbuh Mansour Hadi and sympathizers beyond Yemen – including in Washington. One of his victories as a General Secretary of this Conference was in July 2013 when the Conference accepted to recommend a gender quota of 30% in all governmental institutions, councils and parliaments in the new Yemen. This was not just Mubarak’s victory, women’s organizations and individual political actors cheered this accomplishment. Others did not.
Accidentally, I was in Yemen on that very day, and got invited for one of the hearings organized by the UN Special Envoy in the county, Jamal Benomar. In a brief conversation after the hearing, Mubarak assured me that he did not sleep all night, i.e. the night before the plenary voting for this quota. He, along with all other participants in the hearing, had just witnessed the stark opposition to the gender quota by conservative Sheihks calling it ‘haram’ and against women’s natural position in society.


Ahmed bin Mubarak and his background

But who is Ahmed bin Mubarak – why did he support women’s struggle for more influence and parity in Yemeni society and why did the Houthis who claim themselves to be Shia reject him?
Mubarak was born in Aden, the former British colony in the Southern parts of Yemen. Since his father was a business man trading on the Eastern African coastline, he encountered the multicultural societies there. However, he got his high school and university education in yet another society, Baghdad, Iraq.
Before the uprising Mubarak was Director of the Centre for Business Administration at Sana’a University, and he became a consultant for the Yemeni-Danish Partnership Project, “Development of a Master Programme in International Development and Gender”, at the Gender-Development Research and Studies Centre, also at Sana’a University. On this occasion he explained that he wanted a modernization of women’s lives in Yemen.
Ahmed Awad bin Mubarak who was unknown to the Yemeni public before the uprising has had a hasty political career. During the popular uprising in 2011 which in Yemen got momentum quickly after the masses took to the Tahrir Square in Cairo, his overview and diplomatic skills obtained him a leading role among the youth movement, and as such took part in negotiations which were conducted already during the uprising.

After the agreement which ousted the long-term Yemeni ruler, Ali Abdullah Saleh, he was appointed rapporteur of the Technical Committee preparing the National Dialogue Conference in which more than 500 delegates participated in eight different committees discussing solutions to Yemen’s most threatening problems– among them notorious corruption and demands of independence from the formerly independent Southern Yemen, and from the well-armed Houthi tribes, a better share of influence in Yemen.
Among the delegates 28% were women, either participating as ‘independents’ or as members of political parties (more details at www.ndc.yemen). The National Dialogue was remarkable as a necessary step, but also an experiment which was utterly dependent upon the consent and support from the population. Accused for being in essence an élite project, the issue of men’s power-sharing with women was one of the most controversial issues of the conference; at the same time Yemen which prior to the uprising had one female member of parliament and one female minister, has never before experienced so many Yemeni women acting in a public and formal political setting.
The women delegates proved themselves to be outspoken, well-qualified and critical. During the hearing in which I participated this was obvious. Thus, one young female participant raised her hand to obtain the micro-phone to give the following comment: “I have now for more than one hour been looking at the UN flag and the Yemeni flag and asked myself: Why is the UN flag larger than the Yemeni flag?” – thus voicing a lack of confidence in the international community which the Houthis more than one year later have given a strong emphasis by seizing control of the process towards ‘a new Yemen’, the slogan of the UN guided process.
Women’s participation under pressure
The seizure of control in the capital of Sana’a by mid-September 2014 and the subsequent days in other Yemeni cities by the Houthi militia constitutes a culmination of the ever more complicated events in post-uprising Yemen, especially from the point of view of women activists. On September 21st the signing of a peace-agreement which confirmed the endorsement of the results of the National Dialogue Conference by all significant political players in Yemen (no women), including the Houthis, means that a Road-map for the new Yemen – a federal system, a new constitution, a referendum and an election for a President is on paper. With these signatures, the scramble for power in which women have been more visible than ever as actors and as objects of struggle, was however not eased but rather intensified.
The Houthis originate in the Saada region in which the majority is zaydi. Although Shiite, the zaydi version practice their own and usually less obtrusive and in public less visual version of Shiism. By the Houthi seizure of power in many Yemeni cities the often announced opening of a window of opportunities for more participation for the female part of the population is in jeopardy, perhaps more than ever.
During the National Dialogue the UN envoy’s office gave continual advice and support for the National Dialogue. Mubarak was invited and went to Washington more than once to explain the situation from a Yemeni viewpoint, including the risks in lifting subsidies in a delicate political situation. He related this to me on another occasion when we met accidentally in an airport, both heading for Yemen. Mubarak had had conversations with the State Department and with a group of diverse political actors in the US with interest for Yemen. Apparently, he made a good impression in Washington (he had among other things warned against a lifting of fuel subsidies, which were then taken off the table – when they were lifted one year later it became the main reason for popular support to the Houthis who opposed it) – and the contact which his position as General Secretary of the National Dialogue brought to Washington became a pretext for the Houthis enjoying support from Iran, not approving him.
In addition, it is a widespread assumption that Mubarak is a supporter of the Islamic Reform Party, or in daily speech, the Reform Party, Islah, which is inspired by the Muslim Brotherhood, and currently the political enemy of the Houthis. Proponents of this party came to dominate, first the uprising, then the dialogue process. While Islah has a number of well-known female activists, among them the Nobel laureate, Tawakkol Karman, they are generally approached as opponents by women activists in Yemen.

These women activists are now confronted with the Houthi movement and its’ even more conservative stance regarding women’s societal participation. According to Sana’a and Adeni women activists alike, the conditions of women in terms of independence, participation and influence are in the Saada regions notoriously bad. As Sabria Al-Thawr, Ph.D student at Roskilde University points out, in Islah marches of the uprising, male and female demonstrators marched side by side; the Houthis marched with women, totally secluded, on the one and men on the other side of the road. To the surprise of women activists, Islah no longer constitutes the main opponent, rather the less bad solution.