“If women were in charge, there would be no war”

Syrian artist Sulafa Hijazi fuses the innocence of childhood with symbols from the destructive trappings of war. When people begin to glorify death and begin viewing birth as something trivial, the natural cycles of life and death become an absurd spiral of meaninglessness. In war the standpoint of only one gender holds sway: the masculine’s.

’I experienced contradictory feelings during the revolution – a mixture of fear, courage, hope, pain, guilt, weakness and alienation. Over the past two years, when I stayed in Syria, drawing was the only tool I could use to share these feelings with people inside and outside the country, through online social networks’.
- Excerpt from Sulafa Hijazi’s contribution to the Syria Speaks anthology.
The anthology has been edited by Malu Halasa, Zareer Omareen and Nawara Mafoud. Syria Speaks is available for purchase in Denmark from the Korridor publishing house
Among the many organisations which have provided support to the publication is the Danish Centre for Culture and Development (CKU)
Read more about Sulafa Hijazi on her website
View Sulafa Hijazi’s art on her Tumblr site

A picture depicts an unborn child curled up inside a machine gun rifle, as if the weapon were the womb surrounding the child. Another picture depicts a man lying in pain on his back whilst he gives birth to a gun.
These are Syrian artist Sulafa Hijazi’s comments on the violence that is currently ravaging her homeland. Although she currently lives in exile in Germany, she grew up under the Assad regime. During that time, she, like all other children there, had to wear a military uniform to school and learned to shoot in case the enemy should attack. Having grown up under such conditions, the violence and the language of war remain deep within her even today.
“The Syrian dictatorship was a socialist military regime where you were just one among the masses as it was impossible to be an individual. We were so restricted by rules and social taboos that our way of thinking became a militarised way of thinking, conditioned to understanding the system. The revolution enabled me to take revenge on my military-regime childhood. At the same time, I wanted to show just what violence and war is doing to those who are children in the current conflict,” tells Sulafa Hijazi.
Sulafa Hijazi is in Denmark in connection with the publication of the book Syria Speaks, an anthology bringing together first-hand accounts from over 50 Syrian artists about the current armed conflict that has been raging since 2011. Sulafa Hijazi’s contribution, entitled Ongoing, consists of a number of her works of art, all of which are surrounded by a text that describes her thoughts as an artist during a time of war.
It is not merely the war that is an ongoing process – it is also the continuing cycle of violence and her own process of finding a diasporic identity between her childhood of being taught to think in terms of the regime’s systems, the traumas of war and her new-found freedom.

Before the revolution in Syria, Sulafa Hijazi worked as an animator. She produced digital cartoon films for children that taught them about the world and society through a poetic language. It may seem like a huge leap to move from a world of children’s films to political art, but for Sulafa Hijazi the revolution has been a catalyst for her art.
The world of children’s animation was a safe area in which she could express her creativity; however, with the onset of the revolution, many artists suddenly found that they were now able to express themselves freely. The language of art became part of the expression of revolution.
“When the revolution began, it had an artistic form. People danced and expressed themselves in the streets, and they painted banners. Art was an integral part of the social change, part of the uprising – or perhaps it’s more correct to say that art was a part of the language that was being spoken at that time. In itself, art is not a means of changing something; it’s a form of expression. It’s a much better, more elevated form of expression than violence and war. But now, creativity is no longer a feature of everyday life on the streets. Perhaps this is a consequence of the fact that the majority of intellectuals and artists have had to flee the country due to systematic persecution,” tells Sulafa Hijazi.

The cycle of life and death

The innocence of childhood still takes precedence in Sulafa Hijazi’s art. Now, however, this childhood innocence is juxtaposed against a backdrop of weapons and tanks – the destructive instruments of war. The link between life and death is a recurring theme in Sulafa Hijazi’s work. Death is an inevitable part of life and part of the natural cycle, but violent death and murder are not. Or at least, they ought not to be. During the armed conflict the boundaries of normality have shifted, and murder and killing have become everyday occurrences.
“Death has suddenly become a reality in Syria. Death has become commonplace, a normal occurrence, something that happens. Death is of course part of life, but death from violence or murder shouldn’t become something we end up accepting as normal. Since we began accepting death as something normal in Syria, we also began accepting murder as something normal – it’s become just another part of daily life.  The entire discourse surrounding death changed during the revolution. Suddenly, the revolution’s slogan ‘We’d rather die than be humiliated’ appeared. Death became elevated to something to be celebrated and revered,” explains Sulafa Hijazi.
Sulafa Hijazi deliberately does not refer to the conflict in Syria as a ‘civil war’, despite the fact that this is a term frequently used by the international media. For her, it is still a revolution. It is the people’s fight for freedom – a fight that she wishes would take another form, although, as she sees it, violence has always been a latent element of Syrian society merely waiting for some event to trigger it off.
“What’s happening now is also a consequence of the 40 years of oppression that have preceded the revolution. How can you expect people who have lived without being able to express themselves freely for 40 years suddenly to embrace peaceful democracy? Perhaps it would have been different if the development had occurred gradually, but we were coerced with violence, and we were tortured and raped. Violence breeds violence,” observes Sulafa Hijazi, who has experienced that the reason women have taken to the streets has not just been to topple the regime but also to put an end to the religion-based patriarchy that constrains every aspect of their lives.
In the early and hope-filled days of the revolution, the desire for personal freedom was – for many women – inextricably linked with the desire to do away with gender conventions. The radicalisation that exists in the current conflict bears witness to the fact that this failed to materialise.

The rifle as a penis

The contrast between life and death also becomes the contrast between the feminine and the masculine – birth contra murder. During the revolution, Sulafa Hijazi witnessed a radicalisation of gender positions. Masculine strength and access to weapons was glorified, even though this is inextricably linked to killing and rape – acts that would be unacceptable in a society living in peacetime.
“War is masculine. War is all about power and dominance, things that are praised as masculine virtues. Already during the peaceful demonstrations of 2011 you could see people, particularly government supporters, posting pictures of themselves on Facebook showing off their muscles, their tattoos and their uniforms. When we look at pictures of the resistance troops today, we see that they too have started to adopt the same type of imposing stance, holding their weapons in a particular way. Even in Hollywood films, we can see this same depiction of men and their guns, as if they were holding forth their penises. This image of the man as a warrior is one we seem to glorify, but here’s a good question: would it not be more commendable to engage in a conversation?” asks Sulafa Hijazi rhetorically.
The machinegun/penis analogy was solidified in Sulafa Hijazi’s picture of a soldier masturbating his rifle-penis whilst the bore of the barrel is pointed up at his own head. This is a picture that she is currently working on turning into a short animated film, for what will the outcome be when he finally comes? Ecstasy, pain, death and the self-destructive aspects of violence are interwoven to provide not just one picture of the peculiar hyper-masculinity of war but also to show its absurdity and meaninglessness.
Birth provides us with an alternative narrative of pain. Pain in birth is life and delivery; it becomes a symbol of all the feminine aspects that are marginalised by war. It is precisely this contrariety that convinces Sulafa Hijazi that if women were in charge there would be no war. 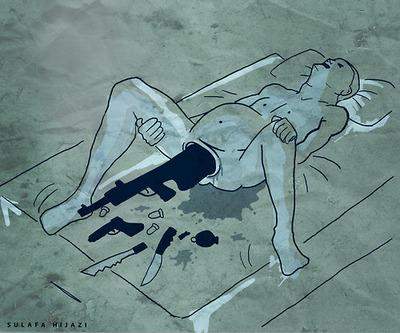 Birth is interlinked with pain; war is interlinked with pain. One provides life to a soul; the other eradicates the soul. When a woman brings a soul into this world, she understands just how precious life is. Eradicating that soul again is both painful and tough. That’s why in Syria Speaks I write that if women were in charge of the world there would be no war. And this isn’t just true in the case of Syria. It’s a global problem that power and dominance are related to the masculine, and that it is men who have access to weapons and  have the power to kill,” tells Sulafa Hijazi.

Despite the fact that Sulafa Hijazi left Syria 18 months ago to move to Frankfurt, Syria has not left her. Her final picture in Syria Speaks depicts a person who is trying to poke their head out from a grey concrete cell, but the person’s face is still staring into the cell on the other side. Fleeing from Syria is still an ongoing process.
“Even though I’ve left Syria, the country is still inside me. It’s always with me, just like the feeling of guilt about having left when there are still people dying there. Now I’m part of the diaspora, in asylum. I’m slowly learning how to take responsibility for myself now that I’m free of the social, political and religious repression that controlled my mind. My way of thinking used to be part of the collective conscience. Now I feel that it is more my own – no one else owns it. I’m freer, but it’s still a process,” concludes Sulafa Hijazi.