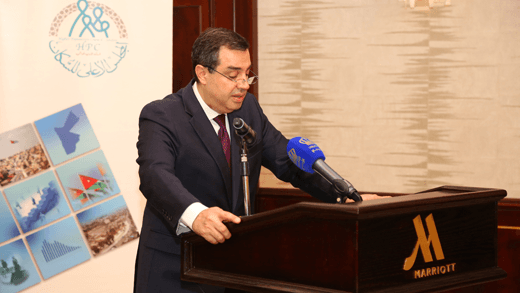 “The marriage of girls under the age of 18 is a reproduction of poverty, ignorance and disease for both the girls and their children.”
Those are the words of Jordan’s Minister for Planning and International Cooperation Imad Fakhoury, spoken at the launch of the report “A Study on Child Marriage in Jordan”. The study is carried out by the Higher Population Council in partnership with KVINFO.
The study finds that underage marriage is a growing problem in Jordan, not least among Syrian refugees in the country. More than a third of Syrian refugee brides were under 18 in 2015, a sharp uptake from 18.4% in 2011. Overall 13.4 % of all women who married in Jordan in 2015 were underage.
The study also analyses the reasons why some parents seek to marry off their daughters at an early age. Maisoon Al Zou’bi, Secretary General of the Higher Population Council gave an overview in her speech:
“According to interviewed target groups, the reasons for child marriage can be: poverty, the families’ desire to be relieved of the financial responsibility of providing for their girls, repeated failure in school, social upbringing, and the desire among Syrian refugees, especially those who come from rural and Bedouin areas, to be rid of the responsibility of “protecting the honour of girls”,” she said.

All in all, the picture is pretty gloomy, not least because the problem is growing. But very importantly the study has sparked broad media attention and is set to have concrete policy effects.
When presented with the results prior to the launch the Prime Minister of Jordan’s Services Committee approved the study and its recommendations and stated that the Prime Minister will ask the relevant institutions to implement the report’s recommendations.
The report calls for a national strategy to combat child marriage, a call that was supported by minister Fakhoury at the launch. Moreover it recommends:

The report also suggests canceling any exceptions to 18 as the earliest age of marriage for both sexes.

Read the full report: “A Study on Child Marriage in Jordan”
The launch of the study drew a broad media attention. Read the English language Jordan Times: “Marriage of girls under 18 is a reproduction of poverty, ignorance and disease”
The image is of Minister for Planning and International Cooperation Imad Fakhoury from the lauch event.