Papier-mâché dolls and shadow puppets are joining forces to perform a play intended on getting Jordanian women and men to reflect on what women and men can and should do with their lives. The Dafa Puppet Theatre visits a group of Jordanian women, who watch the play and discuss gender, their own capabilities and the fight for completely free choice for women. 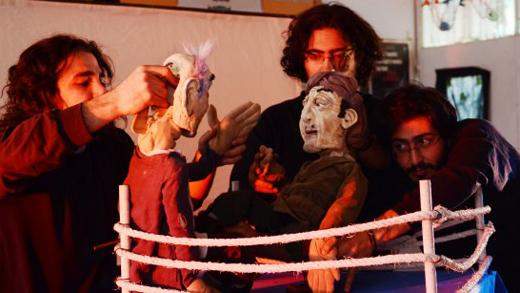 The theatre group’s minibus drives a little slower than the other cars on its journey navigating the maze of roundabouts throughout the Jordanian capital, Amman. I have been invited out to Arrosayfa, an area in the Zaraq region northeast of Amman, where the Dafa Puppet Theatre is going to perform a play. The man in the passenger seat at the front of the car is Husam Abed, puppeteer and founder of the group. Through his productions, performed anywhere from refugee camps to union offices, he initiates debates on the topic of gender.
On the back seat is Mayada Qashou, who makes and controls the Dafa group’s shadow puppets.

The performance today is all about gender and equality – in politics, in society and in the family – and is part of a project supported, among others, by KVINFO. The audience have been invited by the Working Women Society, a civilian organisation for socially disadvantaged women. The guests have all been invited personally.
Here, Husam Abed wants to get women thinking, and eventually talking. He wants to turn words into action. That is why he makes puppets.
“I hope that even a few of those who see our plays think ‘I don’t have to remain silent; I can speak’. My own aunt and grandmother belonged to the group of women who stayed silent”, he explains, punctuated with thoughtful pauses.
In his work, Husam Abed deliberately takes advantage of the generation gap to create something positive. He accentuates the difference between how young and older women themselves believe society views them as women, and he believes that the younger women need the stories of the older women in order for them to reflect and contemplate. Consequently, the theatre group has collected personal recounts from women of all ages at workshops. Here, the participants have told their stories to each other, after which these stories have been turned into plays.
The play today is about a man who dreams of emigrating with his family. He makes all the necessary preparations, gets hold of all the papers needed and makes a plan. But his wife is keeping a secret from him – she is planning to stand for election in the upcoming local election.
“His immediate reaction is one of fear”, tells Husam Abed.
The puppet that portrays the man in the play exudes anger. He shouts and screams, and the puppeteers almost disjoint their limbs in order to show the man’s violent gesticulations and movements. Later, he collapses, powerless and unhappy. Sobbing heart wrenchingly, his soft textile body slumps into a pile on the stage.
“He feels that she’s only competing with him. And he’s scared of a shift in the relationship’s balance of power. It’s quite a common thing”, tells Husam, whilst alertly looking ahead through the windscreen. The bus is approaching the area where the group will be performing.

For Husam Abed, equality shines through as a recurring theme in everything – in stories and personal accounts that deal with politics and elections, social conditions, and emigration. Equality is a theme that plays a large role in his life – equality between age groups, social groups, nationalities and genders. Between men and women.
And here he is well aware that if you want to create change it is not enough to merely involve the group that is ‘least equal’,
“Above all else, it’s important to change the men’s way of thinking”, he explains, adding, “Almost no-one here in Jordan works with equality and women’s rights though men.”

The stage and the play

The bus comes to a halt, and we enter a large brightly lit room with bookshelves along one wall and windows along another. Two women from the Working Women Society are arranging plastic chairs and tables, and the members of the theatre group begin bringing in equipment and darkening the room. There is a chill in the air, despite the fact that the sun is shining on the other side of the dirty windows.
The members of the theatre group test lighting and sound and hang up banners. The guests begin arriving and seat themselves in the rows of seats in front of the little stage. There are women of all ages, some with children, some wearing headscarves, some without, a couple with their faces covered completely.
The lights are switched off and on come the puppets. The man in the play looks back on his life, whereas his wife wants something other with her life than what he had imagined and planned for. He feels like he has been kept in the dark and let down, and he does not completely understand why. 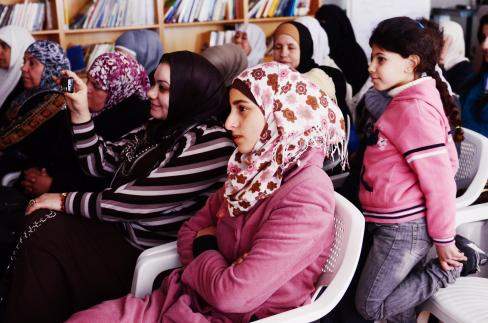 The questions, the answers and the discussions

After the play, the lights are turned back on and with the audience still in their seats the theatre group members step forward – all of whom are men, except Mayada Qashou – not to receive applause, but to ask and listen.
As one of the first, a woman from the audience asks to what extent it is a natural right for a woman to stand in an election.
“Yes, it’s of course a civil right”, says another, and a third woman agrees.
“I’m planning to stand in the next local elections. I’m well educated and qualified at every level. But I know that there’ll be resistance among those men who have a traditional view of things. How can I overcome these obstacles that I know I’ll run into?” asks a different women sitting in the audience.
A brief stillness spreads through the room, but is soon replaced by a buzz. And then another woman speaks out:
“You must stand – and without fear. We need to hold onto our rights”, she says.
“I’m against total equality,” says another woman, “there’s a difference between men and women and each has their place”.
A member of the theatre group suggests a show of hands, and the raised hands show a widespread consensus. The women talk about their work lives and family lives and work sharing in practice.
“It’s we women who take the children to school, go to work ourselves, do the shopping, collect the children again, help with homework, cook, and do all the other housework” comes an empowered comment, highlighting the typical tasks of Jordanian women. .
Husam nods and looks at those who are speaking and those who are just sitting. He looks pleased – this is important to him. People have to talk about and reflect upon what they have seen.

Even if women do stand for election, they are not elected anyway, because people – including women – have a tendency to vote for a man, says another woman in the audience. Many nod in agreement.
“But it’s not only that. Clans and tribal relationships determine just as much who gets elected”, says another woman.
They are talking about a male-dominated society. About the difference in how families treat boys and girls. That families encourage boys to get an education, whereas girls are allowed to take an education, but are often not allowed to use it afterwards.
“I myself am one of them – one of those women who are well educated, but who afterwards are simply married off. Women are of course allowed do take an education, but at the same time they must attend to their duties, look after the home and be married”, comes another comment from the audience.
The room is now abuzz. Not many are staying silent. The majority of them have something they want to share, with the whole room or just with their neighbour.

On the drive back, Husam Abed and Maya Qashou are keenly reading through a stack of papers. These are the audience’s own, written descriptions of their expectations before and after. The majority have been surprised. And very many are satisfied.
“We do this every time,” tells Husam Abed, “that is give the audience paper and pencils and ask them to describe what they thought they would experience and then describe their experience of what in fact happened. As a rule, there’s normally a big discrepancy. People think that they’ll just be sitting getting entertained and not contributing anything themselves, but hardly anybody is unhappy with what they take away with them.”
The group’s only woman member, Mayada Qashou, now has something she wants to say. She has almost only male acquaintances and she lives alone,

albeit in an apartment that is connected to her family’s home. Both these things a unusual and difficult for many she meets to comprehend. But Mayada Qashou would have it no other way. She makes a living by providing a catering service, specialising in cakes and deserts, from her home.
“I don’t fit in with the expectations that most people have about Jordanian women. People think that I ought to go out and find a husband, but I’m quite happy the way things are”, she explains.
This is one of the reasons that she is so happy to be part of the theatre group. She wants to keep on giving other Jordanian women the courage and opportunity to make choices and determine their own lives.