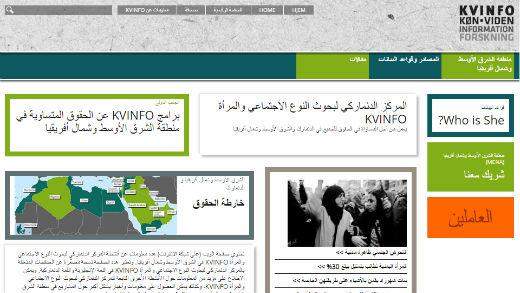 KVINFO works with a range of partners across the Arab world. Until now they – and we – have lacked a site where they could find information about KVINFO and our activities in other languages than English.
That’s why we now launch an Arabic language version of our webpage. It contains of course information about KVINFO’s work in the Middle East and North Africa under the Danish-Arab Partnership Program, but you’ll also be able to find a presentation of KVINFO in general and the values we build our work upon as well as some information about the struggle for gender equality in Denmark today and historically.
The Arab webpage is an important part of a strengthened dialogue about our work. Here all members of our partner organizations and others with an interest in our work can access basic information about our program and about gender equality in general. It will also be of use for our program consultants to show when travelling in the region.
The webpage is also the new home of the background articles from the WoMen Dialogue magazine, which has had a version in Arabic for years. Just like the English version, the magazine is now an integrated part of the relaunched KVINFO site.
See KVINFO in Arabic here