All human beings have the right to develop their personal abilities and make choices without limitations set by gender norms. 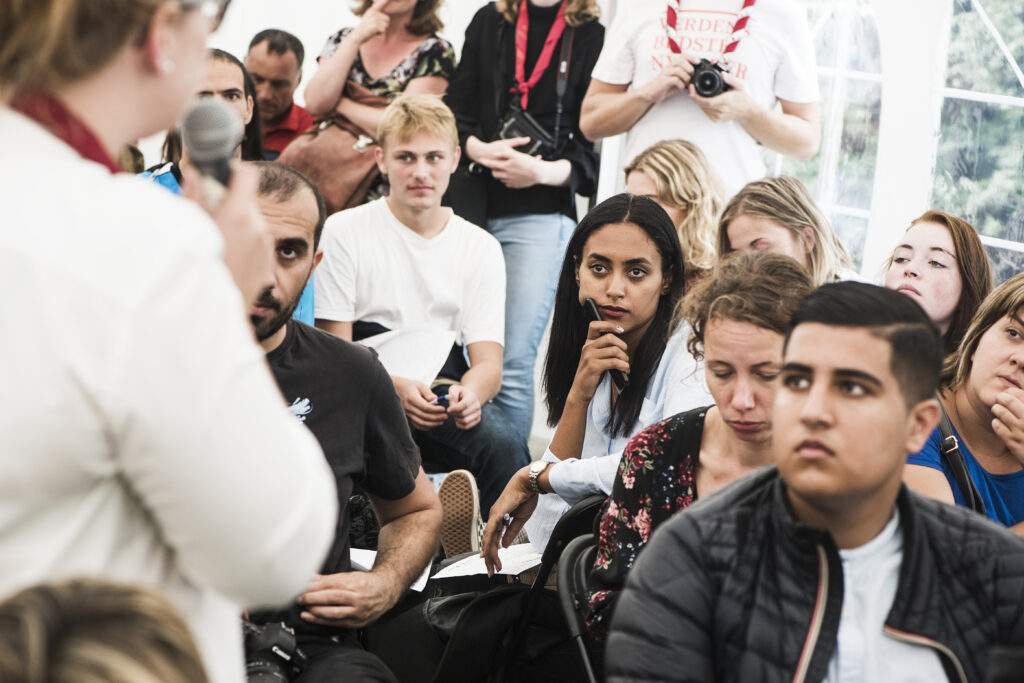 KVINFO aims for a society with equal opportunities, rights, and responsibilities for everyone. However, many women experience multiple barriers in achieving gender justice.

KVINFO strives to work adaptively to ensure that progress is possible despite instabilities and political changes in the Middle East and North Africa. KVINFO’s approach includes space for learning and experimentation, information sharing, and changes in methodologies and strategies.

KVINFO’s project implementation is usually led by local partners that are part of and experts in the particular context. They have intimate knowledge and connections that benefit the activities that KVINFO and the partner wish to implement.

The partners have close ties to their constituencies, and they know how to adapt activities to their specific needs and changing circumstances. An example is the adaptability they have demonstrated during the COVID-19 pandemic. Local partners remain in their own countries, allowing them to advocate persistently and to contribute to making outcomes sustainable.

‘”The conventions are the most specific instruments we have, and the governments have signed and ratified them. This does not necessarily entail that the governments implement the changes that are necessary to fulfil them,” says Lene Steffen.

KVINFO’s work contributes to the UN Sustainable Development Goals, “However, data to monitor progress on gender equality are often lacking, particularly in areas such as gender based violence,” Lene Steffen states.

KVINFO advocates for changes in policies and laws that are not favourable to gender justice.

KVINFO and partners focus on family law that derives from Islamic law and that allows for legal discrimination.

“In some countries our local partners focus on changing one law at a time. They hope for a country-to-country domino effect. We have previously experienced such an effect when laws were abolished that allowed rapists to escape prosecution if they married the woman who was raped. Our partners are supporting each other in this process,” says Steffen.

As a supplement to advocacy, KVINFO and partners raise awareness on laws, rights, and the duties of states as agreed in international conventions.

“Men make decisions, but as breadwinners they have duties too in the Middle East and North Africa. If you want to change a patriarchal culture, you must change everybody’s perception of the male role. This is why we are working with masculinity and gender stereotypes in all the countries. Cultural change is needed if the laws are to be changed, and when the laws are changed, the culture changes further,” explains Cecilie Poulsen-Hansen, Senior Programme Advisor, KVINFO.

“KVINFO contributes to knowledge building and to bringing people together. The convening power is our focus. We are able to bring the most important people, institutions, and corporations into action,” says Poulsen-Hansen.

For example in Tunisia in 2019, KVINFO hosted a meeting for all its partners.

“People from different countries escaped the daily humdrum for a while to meet, exchange knowledge and experiences, and be recognised by like-minded professionals,” explains Katarina Blomqvist, Senior Programme Advisor, KVINFO.

Partner representatives have also been on study trips during three elections in Denmark to meet peers.

KVINFO supports data collection and analysis to document the existence of the problems and barriers to gender justice, and to be able to measure progress – or the opposite – on key gender justice issues.

By systematically collecting evidence, organisations can document that it is not a matter of one woman being beaten, but a systemic and structural societal problem experienced by many.

Denmark is as a member of the UN Human Rights Council for the 2020–2022 term. KVINFO, together with other Danish organisations, has provided evidence-based recommendations to the Ministry of Foreign Affairs of Denmark prior to the council sessions.

KVINFO has also supported partners with participation in follow-up activities concerning the Beijing Declaration in the UN Commission on the Status of Women in New York.

“This was especially useful for Egyptian partner organisations, because at such international meetings no one can silence their voices,” stresses Lene Steffen.

KVINFO and its partners use a variety of methodologies in the implementation of projects at field level. KVINFO supports partners with coaching on human rights and gender equality so they can develop their own methodologies.

To enable complete transparency, results from KVINFO and partner activities are documented with a focus on changes at individual, group, and societal level.

LOTS OF EXPERIENCE AND EXTENSIVE ADAPTABILITY

“KVINFO is widely recognised as a player in the region. Due to our vast experience, we are able to pick up the context quickly and lead highly complex programmes,” explains Poulsen-Hansen.

KVINFO considers partners better placed to advocate and fight for gender justice in their contexts. It is important to support the organisations to become strong voices for human rights and gender justice, and and KVINFO considers this a more sustainable way to achieve change rather than opening KVINFO branches or offices outside of Denmark.

“Fortunately, our partners are very good at detecting the most important issues and have changed their focus to what the pandemic has done to people, for example by addressing the escalation of violence against women while confined during the health crisis. One organisation carried out an extensive COVID-19 campaign on the streets. Another developed a study about the consequences of the crisis,” Poulsen-Hansen said.

Challenging the Moroccan government to act against...