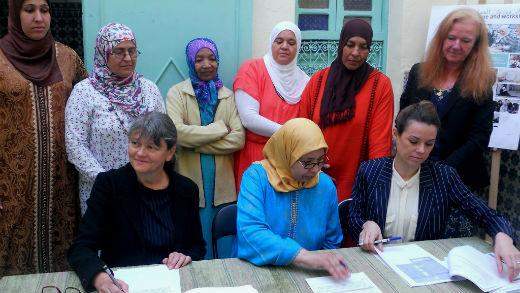 Director Nina Groes is in Morocco this week to visit a number of KVINFO’s partners in the country. During her stay she has met with partners that KVINFO has worked with for years as well as new partners, where projects are still under preparation.
One of the visits was with Reseau Femmes Artisanes (RFA) in Marrakech. RFA is a cooperative of woman artisans which for a number of years has cooperated with the design school at the Royal Danish Acacemy of Fine Arts (KADK) in order to develop methods for design, marketing and business plans for their members. The project is supported by KVINFO.
The project is now entering a new phase in which RFA’s experiences will be used for starting similar projects with woman artisans in other Moroccan regions. The project is ready to start, and during the visit there was a small ceremeny where Nina Groes signed the new partnership agreement together with RFA’s leader Saida Chaabouni and Grethe Weber from KADK.