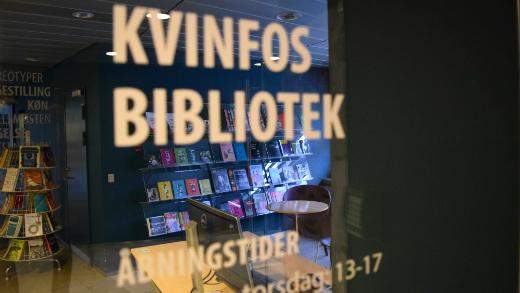 On Monday March 20th, the Minister of Culture Mette Bock announced that she has decided to move KVINFO’s library over to the management of the Royal Library. The purported reason is “digitisation” and the fact that a number of other libraries have been moved to the Royal Library. The board of KVINFO thinks that this is the wrong decision, made on insufficient grounds, and a decision that ought to be overturned.
KVINFO’s library is not merely a collection of books and periodicals. It is just as much the committed staff with a deep and extensive knowledge on the reasearch that is available on equality, both in KVINFO’s own collections and around the world. Both the physical materials and the library staff, and the knowledge they adminster, are inextricably linked with the other job KVINFO is tasked with by the Ministry of Culture, which is to be a national center of knowledge on equality. It is impossible to remove the library without weakening the rest, and therefore weakening the whole of KVINFO’s overall work towards equality in Denmark.
With the help of the Ministry of Culture, KVINFO has been put into the world with the overall purpose of working towards a more equal society. This work ought to be done in the best possible way, and that is why we think that KVINFO’s library should stay with KVINFO.
KVINFO’s board is establishing a working group with the purpose of securing a solid basis of fact and documentation, in order to ensure a factual basis for further discussions on the matter.
KVINFO’s activities make up a substantial and kowledge-based contribution to the debate around gender, equality and diversity. We work on many different fronts in mutual support of each other, and we are looking foward to welcoming a new director in the immediate future, who will deliver renewed energy and speed to KVINFO’s progress and the work on equality and diversity in Denmark.
The Board of KVINFO
March 22nd 2017