'Sharaaka'. Free download at the bottom of this page. 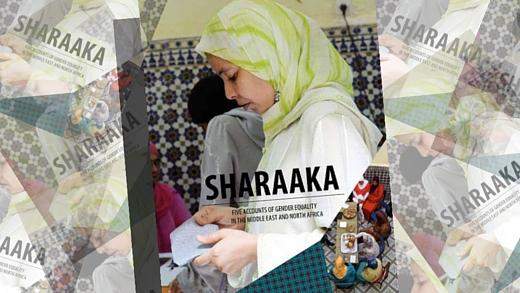 ’Sharaaka’ means partnership in Arabic. ‘Sharaaka’ is also the title of KVINFO’s new book explaining about our extensive partnership programs in the Middle East and North Africa (MENA).
We are pleased to announce that ‘Sharaaka’ is now available in English.
The book has been released to celebrate KVINFO’s tenth anniversary working in the MENA region. Over time, we have implemented a variety of programs, and ‘Sharaaka’ has five accounts sampling various partnerships and joint results.
Overall, the stories of ‘Sharaaka’ provide a picture of the different themes and target groups working together with KVINFO under The Arabic Initiative.
During the years final results has been created, which has generated the changes in the culture and in society.
Above all the work and progress has been for the benefit of gender equality and hence the total democratic development of the Arabic communities.

Every account, stemming from Morocco, Egypt, Tunisia and Jordan, are supplemented with a chapter explaining KVINFO principles and objectives when working with legal rights, women’s economic participation, knowledge and documentation, women’s political participation and KVINFO’s outreach.
‘Sharaaka’ English can be downloaded free of charge as a PDF here.
‘Sharaaka’ is now also available in Arabic.