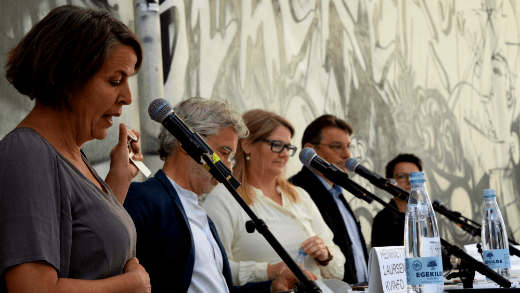 The new phase of the Danish-Arab Partnership Programme (DAPP) was launched on June 1 with all the Danish partner organisations present. The programme lays out the framework for KVINFO’s work in the Middle East and North Africa for the next five years.
Gender equality is a cross cutting focus in the programme along with youth and thus the theme has a central place in the new DAPP.
”Gender equality and opportunities for youth are key to growth and democratisation, and they prevent extremists and criminals in capitalizing on the frustration amongst youth in the region, that we have to recognize,” said director for development policy in the Danish ministry of foreign affairs Martin Bille Hermann in his opening speech.
KVINFO’s director Henriette Laursen was on the same page in her speech at the opening, which took place in the scruff hall at the street sport organisation GAME, a former partner of KVINFO’s in projects in Lebanon.
”KVINFO is pleased that gender is both mainstreamed across the programme as well as having its own focus area in the DAPP 2017-21 – because we know it is an effective approach!” she said.

In the panel were leaders from the five organisations that are leading partners in the DAPP activities in the areas of gender equality, free media, human rights, economic opportunity and youth.
The organisations have all been chosen for this through a deliberate EU tender process in which KVINFO was chosen as lead partner on the gender equality activities. However, several of the panelists, including Henriette Laursen, pointed to the possible synergy and connectedness between the focus areas.
“KVINFO wishes to contribute to a robust and value adding work across the areas, just as we ourselves need to make use of possible connections to the activities of the other organisations in our own work,” she said.

The first two focus areas are continuing from the current programme, and preventing gender based violence has previously been part of KVINFOs work in the region. On the other hand sexual and reproductive rights has until now only been a minor focus, with the exeption being the work against underage marriage, that KVINFO and its partners have started in Morocco and Jordan.

KVINFO’s new programme is carried out in partnership with four other Danish organisations, especially when it comes to gender based violence and sexual and reproductive rights. Areas in which their solid competences and experiences will benefit the activities.
The partner organisations are:
Women’s Council in Denmark
Danner
The Danish Family Planning Association
LGBT Danmark
KVINFO is lead organisation. The Women’s Council and Danner and Danner have been working in the Middle East and North Africa for a number of years while the Family Planning organisation and LGBT Denmark are new in the region, though not to international work. The four partners and KVINFO all have in common that they are organisations with a strong national profile and activities in Denmark.
As in previous phases the gender equality programme is carried out through a number of strong partnerships with women’s organisations and other relevant actors in the region. Most of them have been partners with KVINFO or the other Danish organisations for years.
Several of the partners in the region are very well established and efficient local organisations with a number of important achievements behind them. An example is Tunisia, where KVINFO’s partner LET (Ligue des Electrices Tunisiennes) played a significant part in achieving the region’s highest proportion of women in the parliament. Or Morocco and Jordan where the local partners have succeeded in their advocacy for important legislative reforms. It is this solid work that the programme is building on.