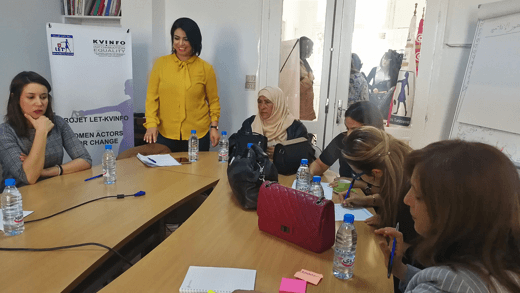 The project “Women Actors of Change” has the aim of increasing the rate of women’s participation over the next three elections (municipal, regional and legislative) and strengthen their capacity to properly manage decision-making positions and advocate for the gender approach.

The new constitution and a gender progressive election law have opened new opportunities for women in politics and greatly increased women’s representation already at the legislative elections in 2014. Before the municipal elections in May 2018, the election law has been revised and now demands vertical as well as horizontal gender parity in the electoral lists – half the candidates must be women, including half of the top candidates and men and women alternate down the lists. Therefore, the project supports women in grasping these new opportunities and makes sure that the increased representation results in real political influence.

Thematic area: Equal participation of men and women in politics.

However, despite all the measures and laws that aim at facilitating women’s integration in the political life, there are still numerous challenges that hinder Tunisian women’s political participation. One of the challenges is to increase the understanding and support for women’s political participation in the population at large and to increase the interest among women to grasp this unique opportunity and present themselves as candidates. One of the methods to overcome the barriers is to provide women with the necessary tools, confidence and expertise to run for elections and to reach participation at the levels of decision making.

During the first period of the five year programme, LET (Ligue des électrices tunisiennes) has focused on capacity building of a maximum number of female political candidates to present themselves at the municipal elections in May 2018. Approximately 400 candidates in three regions have received trainings, individual coaching and mentoring support. Topics include political communication, advocacy, financial management of electoral campaign, electoral process, Gender sensitive budget, political violence and other important tools preparing the women for not only elections but also to influence decisions in the new municipal councils.

In this holistic approach, LET aims to empower the targeted group with a support package that would enable them to participate in the elections with equal chances to men. LET aims to prepare the target group to the municipal elections as competitive candidates with strong leadership and technical skills for an effective political participation.

As part of the project, LET will also monitor the election campaign and the elections themselves with a gender perspective in order to secure that woman candidates get the same conditions as male candidates.

Following the newly approved framework legislation on gender based violence which include political violence as an offense, the monitoring will also be addressing political violence/harassment of female candidates and elected officials.

A Gender Audit Report will be issued following the elections and the findings will be disseminated through LET’s network of women’s organisations.

Post-election, LET will continue the work with the already elected candidates, in local representations as well as parliament, training them in their new decision-making positions in order to strengthen their potential for political influence.

KVINFO has been in partnership with LET since 2012, and the current project builds on the results from previous projects, reaching a broader scope of candidates both in numbers, political orientation, socio-economically and geographically. See description of previous project.