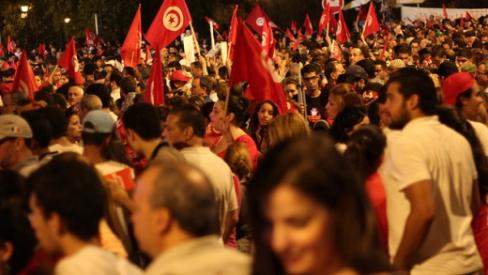 Tunisia is often viewed as a bright example of a successful revolution on its way to democracy and being the most progressive in the Arab world in terms of gender equality. Even prior to the 2011 revolutions, Tunisia was well known for its progress on gender equality. The Tunisian Father of the Nation, Habib Bourgiba, from independence in 1956 and onwards, introduced extensive social reforms – among other issues touching on family planning and women’s rights – the latter including a ban on polygamy, easier access to divorce for women and raising the minimum age of marriage for girls. That line of development has been consolidated up until now, and in the 2009 elections, the ruling party and main opposition parties together introduced gender quotas to increase the number of women candidates.

Post revolution, the new electoral law from April 2011 instituted total parity, meaning that all candidate lists must include alternating male and female candidates for the Constituent Assembly – a principle that womens’ organizations are working to extend to include all elections. In the new parliament elected in 2014 almost a third of the seats are held by women. And the constitution of 2014 turned into a huge victory for Tunisian women – a process in which some of KVINFO’s partner organizations have been very active.

However, despite the recent developments and the strong historical platform for a high degree of gender equality in an Arab context, the new Tunisia is still very vulnerable. Narrow minded traditional and conservative attitudes towards women’s role in society still prevail, especially in rural areas. Moreover, the revolutions and the opportunities as well as the challenges that followed have underlined the relevance of interventions in the country, regarding equal opportunities and further strengthening and consolidation of women’s rights.

According to many Tunisians, the elections victory of the non-secular Renaissance ( Ennahda) party from 2011 sparked uncertainty about the future of women in Tunisia. However, Ennahda party promised to respect the significant gains achieved since independence in the area of women’s rights and gender equality. Simultaneously some members of the party were calling for a criminalization of abortion, adoption and reducing the minimum age of marriage.

After the resignation of Ennahada , a technocrat government was formed with the mandate of preparing the country for the free and transparent election in the end of 2014. The secular party Nidaa Tunis won the elections and formed a coalition government with representation from the non-secular Ennahada Party.

Women are able to own and manage land and other property independently and have equal access to bank loans and credit.

Discrimination on the basis of gender is banned in regard to employment and pay. A married woman does not need permission from her husband to work, but women are still prohibited from working at night, apart from under certain circumstances. Still, women’s participation in the labour force remains low at around 25 percent and there is a low representation of women in top management.

The unemployment rate in Tunisia has grown after the revolution, and the gap between men and women’s unemployment rates has widened since 2005. Women find it more difficult to gain access to employment and are more likely to be unemployed. The majority of the female workforce in Tunisia is concentrated in the public sector, the textiles and clothing sector, including the informal industries. The informal sector is notorious for its poor working conditions including sexual harassment and low health and safety standards and generally pays the lowest wages. In recent years, though, women have been establishing their own businesses in larger numbers.

Tunisia has been one of KVINFO’s major program countries since 2011.

KVINFO currently works in Tunisia within these thematic areas:

KVINFO partners in Tunisia are: