Moroccan Family Court Judges: A Marriage Should Not Always be Salvaged

Mediation has become an established practice in divorce cases for several Moroccan family court judges. The practice has developed thanks to a partnership programme between KVINFO, The State Administration in Copenhagen, and the Moroccan Ministry of Justice. The aim of the programme is to consolidate women’s rights in divorce. 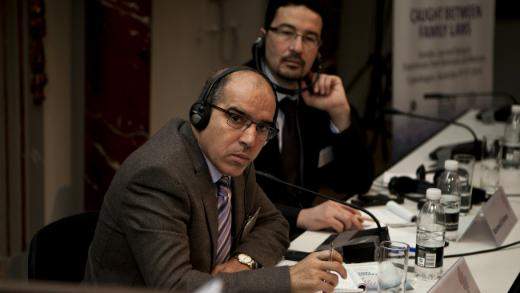 Hamid Fadli and Mohamed Ali El Hichou agree: Mediation has proved to be an important tool in their work as judges in Morocco, particularly in divorce cases.
“One of the benefits of mediation is how mediation aids in making the partners listen to one another. Once a husband becomes more aware of his wife’s needs, he also becomes more receptive to her concerns,” explains Mohamed Ali El Hichou, head of the Family Section and vice president of the court in Chefchaouen (a city in Northwest Morocco, Transl.) when interviewed by KVINFO in Copenhagen.
He has completed mediation training with his colleague, Hamid Fadli, and five other Moroccan judges, and is a mediation-trainer of other Moroccan judges – a method, which will be implemented by dribs and drabs by the Moroccan family court system.
The training programme took place from 2008 to 2013 as part of the KVINFO project, ”Strengthening Women’s Rights and the Accesss to Justice in the Moroccan Legal System”, with the aim of implementing equal rights and consolidating women’s rights in cases brought to the family courts in Morocco.
In Morocco, a judge is required when one of the partners requests a divorce. Divorce is granted by the judge. While judges are not entitled to refuse divorce, they may, however demand a reconciliation process.
“The judge must first and foremost strive to reconcile the partners in order to prevent divorce. If reconciliation is not possible, the judge must mediate in order to ensure minimal conflict during the divorce process,” explains Lene Ingvartsen, senior programme and finance advisor in KVINFO’s Department for the Middle East and North Africa.
The reconciliation requirements are codified in Mudawana, the Moroccan family law, which was revised in 2004 and recognised for ensuring women a new range of rights in accordance with Islamic jurisprudence, an essential identity component for many Moroccans. One of the most important amendments was the introduction of Shiqaq, or dispute, as a valid reason for women to apply for divorce. Today, a woman’s statement that reconciliation is impossible is sufficient to grant her a divorce.
The new family law thus – formally – ensures equal access to divorce for women and men. Mediation was introduced as part of the revision, but only as a method to be deployed in cases where reconciliation has not been possible.
Mohamed Ali El Hichou explains:
“If a decision has been reached to dissolve the marriage, mediation contributes to the development of a shared understanding. In such cases, one must focus on the future, and mediation offers judges a tool to handle the time bombs, which are always deployed in divorce cases. A divorce does not signify the end, rather it is simply the beginning of a tornado of issues pertaining to child custody, visitation rights, and alimony.”

Conservative Judges Stand in the Way of Development

While the Mudawana is surely groundbreaking with respects to women’s rights compared to the legislation of the other countries of the Middle East and North Africa, there remains, according to Lene Ingvartsen, very obvious obstacles to the implementation of mediation in Moroccan family courts. Prior to the launch of the project, KVINFO carried out a fact-finding mission to Morrocco, which suggested that conservative judges would presumably continue to favour men during divorce proceedings, even though Mudawana clearly stipulates women’s grounds for divorce.
“A woman may petition for divorce against the wishes of her husband. In such cases, a conservative judge – who does not believe in women’s right to divorce – may attempt to stall the reconciliation process. It is simply a strategy designed to exhaust the citizen so she will eventually withdraw her petition for divorce. There is a male bias here, because, traditionally, it was much easier for men to obtain a divorce. “There are much higher demands placed on women’s statments in such cases,” explains Lene Ingvartsen.
If a woman’s petition for divorce is granted, the judge may similarly favour the man in terms of child custody and alimony. There is, in other words, a continued inertia within the system, which hinders equal rights in divorce. The mediation training has thus implicitly aimed at proposing the judges new ways of considering the citizens in Morocco. The training completed by Mohammed Ali El Hichou and his colleagues is part of a partnership project between KVINFO, The State Administration in Copenhagen and the Moroccan Ministry of Justice. A total of 75 judges have been trained in mediation techniques during the project, which was supervised by development consultant and mediation expert Leise Døllner from The State Administration.

Mohamed Ali El Hichou believes mediation work in the Moroccan justice system is quite similar to the work carried out in The State Administration in Copenhagen:
“Mediation is an objective and impartial mechanism, and is thus a universal approach. Regardless of geographical context, mediation is about expressing the feelings and needs of the parties involves.”
Lene Ingvartsen explains that mediation in a Moroccan context most often centres on bringing men to accept the legal rights of women:
“Mediation aims to create results which are acceptable to both sides. Since Moroccan men have traditionally been favoured by the law, mediation often has the scope of safeguarding women’s rights while concomitantly ensuring that the man does not counteract by other means, e.g. if he is unhappy with the court ruling regarding alimony payments, he may petition the court in order to obtain child custody. This is very similar to the mediation carried out by The State Administration in Copenhagen. Mediation is about the prevention of court cases when one part – most often the men in Morocco – feels wronged by the court safeguarding the legal rights of the other party,” explains Lene Ingvartsen.
In Morocco, the issues are compounded by the fact that the parties are often unaware of their legal rights. Due to the vast differences between urban and rural areas, Moroccan illiteracy rates are among the highest in the Arab world. In rural areas, people are often unaware of their basic democratic rights.
“Conservative men with old-fashioned notions of gender rights find it particularly difficult to accept alimony payments,” explains Lene Ingvartsen.

In Morocco, the mediation techniques have been adopted by younger judges in particular.
“They are often less conservative. A younger judge is often more liable to afford women the rights they are entitled to by law. This small change of heart is a contribution to improved conditions for women,” says Lene Ingvartsen.
The mediation training thus also serves to raise awareness as judges become more attuned to the actual intentions of the law. In certain areas of the law, judges in Morocco are afforded notable authority to interpret the law, and judges are highly regarded in the country:
“One of the judges made the joke that in Morocco there is Allah, the royal family, and the judges. And their elevated social position clearly contributes to their influence. If judges communicate that women’s rights are indeed codified by law, this will significantly contribute to the implementation of women’s rights.”
While initially sceptical, the seven judges who were trained to instruct other judges have, according to Leise Døllner, embraced the mediation concept:
“In the beginning, we were met with resistance from the judges who did not see the point of mediation. But slowly, during the course of the training sessions, as they experienced through role play the impact mediation may make on a process, they came to understand mediation as a method of synthesis, which renders reconciliation a part of the mediation process,” explains Leise Døllner.
At the conference on gender, the law, and religion in Morocco, ”Caught between Family Laws: Gender, Law and Religion – Experiences from Denmark and Morocco”, which was held in December 2014 in Copenhagen, Mohammed Ali E Hichou expressed how the training sessions had changed his opinion of the potential of mediation in divorce cases:

“I once convinced a woman seeking divorce to return to her husband. At the time, I considered this a successful reconciliation process. But a year later, I was approached by the woman’s grandmother who told me that the woman – a victim of domestic violence ¬– was now pregnant and had been abandoned by her husband. I no longer consider this case a success and today, I would have handled the case differently,” said the judge, adding: “A marriage should not always be salvaged.”