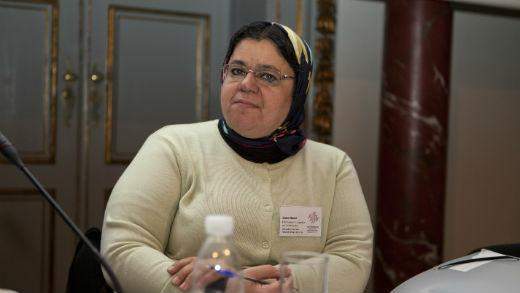 As a Muslim feminist, gender researcher, and women’s rights activist, Moroccan Souad Slaoui is customarily invited to conferences on women’s rights worldwide. She is however, always struck by one aspect when participating in gender equality conferences in the West: The absence of men.
When considering the difference between non-Western and Western feminisms she says: “In my experience, there is a different male presence in non-Western feminisms. In our part of the world, many men are actively engaged with women’s rights issues”.

The 51-year-old lecturer of linguistics and gender research is participating in a KVINFO conference on the development of the Moroccan family laws.

Souad Slaoui is lecturer in linguistics and gender research at the Sidi Mohammed Ben Abdellah University in Fez, Morocco.

She is co-founder of ISIS Center for Women and Development, a centre for information and research on gender and women’s rights in Morocco. The centre aims to further women’s rights, build bridges between academia and civil society, and engage in international networks. KVINFO has previously supported the centre’s activities.

ISIS Center for Women and Development is a member of KVINFO’s research network spanning the Middle East and North Africa. The research network was founded in 2009 and is supported by The Danish Arab Partnership Programme under the Danish Ministry of Foreign Affairs.

Islamic feminism denotes a wave within the women’s movement in the Arab world, which makes the case for women’s rights within the framework of the Qur’an and Islamic traditions.

The movement has, particularly in Morocco, achieved results by forming a consensus with some of the conservative religious forces, which often oppose women’s rights. Read more about the Moroccan experiences in this article: Morocco: The new test bed for Muslim feminism

Morocco’s current family laws, or Al-Mudawana, dating from 2004 represent a giant leap forward for Morroccan women as the conditions and rights of women were improved in a range of areas with regards to marriage contracts, inheritance issues, and the possibility for obtaining a divorce. The country’s 2011 Constitution further consolidated these rights as gender equality was codified giving women the right to petition for divorce on an equal footing with men and establishing the age of eighteen as the minimum age for marriage for women and men.
The advances in gender equality in Morocco during the past ten years is a result of unfailing feminist activism: Moroccan women have struggled for their rights throughout society and have applied pressure on political decision makers through various non-governmental organisations.
Today, however, there is still a cause for concern due to the discrepancy between current legislation and everyday social practices. This is where men, according to Souad Slaoui, constitute an indispensable reserve.
“Essentially, our country is still an extended tribal society. Men play a major role in a positive as well as a negative respect. As a Muslim woman I defend women’s rights for the sake of the family. We need the participation of both genders if we are to create well-balanced families and a well-balanced society. Men must be educated on women’s rights and they must strive to implement these rights. We cannot change society without changing people’s mind set”, says Souad Slaoui and explains that her two daughters and her son share the same rights and duties in her household. The small everyday changes form part of a greater puzzle that may over time change mentality permanently.
Her views are partly founded in a pragmatic form of Islamic feminism, which tries to create the space necessary to develop women’s personal status in civil law within the framework of a Muslim context, and partly due to her own personal history.

Islam Can Accommodate an Emancipatory Project

Souad Slaoui points to her own experiences as an example of the great strides made by Moroccan women and as proof of their achievements. Born to a conservative family comprising five brothers and a sister, Souad Slaoui is the only family member who has completed higher education. Education was not a right she achieved without struggle however. In accordance with Moroccan traditions and the fear of shaming the family, Souad Slaoui’s father had intended to marry her off at the age of nine or ten. Her mother had married her father at the age of thirteen, her grandmother was married off at age nine and gave birth to her father at the age of eleven. Such was tradition.
Souad Slaoui made other plans for herself. She wanted to pursue an education. In order to achieve her goal she armed herself with quotations from the Qur’an and allied herself with her uncles.
Today, this experience supports her belief in men as patrons of women’s advancement. And the understanding that a modernised reading of the Qur’an imbues Islam with an emancipatory dimension.
“Our religion is not opposed to gender equality. On the contrary, our religion supports gender equality but over time, people have confounded their interpretation of Islam with traditions and social mores. It is a positive fact that we are now able to revise the status of men and women within Islam. New readings of the Qur’an and the Islamic texts enables us place the texts within a modern contexts – something, which offers us great rewards, says Souad Slaoui.
This way of thinking is aligned with a stream within Islamic feminism in Morocco, which strives to create a broad, culturally-sensitive understanding with regards women’s equal status in society without clashing with the emerging conservative and Islamist groups. So, Souad Slaoui is not interested in transforming women’s role in the family, traditionally considered the foundational unit of Moroccan society. Instead, she draws once more on her own personal experiences of always being supported professionally by her husband who is a doctor. “Balance” and “harmony” are the key ingredients in her recipe for a more equal Moroccan society.

Education Is a Necessary Pre-requisite to Dialogue

Souad Slaoui is well aware that some Moroccan entities will not budge easily. Traditions and cultures cannot be modernised overnight. Yet she does not hesitate when looking for answers to creating a lasting change of mentality: Education.
“Education should be for everybody. Education offers people the opportunity to discuss, listen argue for and against a case, to convince others, and become convinced. I would like to see all Moroccans educated to a level, which fosters openness and enlightenment. That will allow us to achieve our goals, explains Souad Slaoui.
Education and awareness raising has also been a component of her battle against early marriages, a staunch tradition in Moroccan society.

Obligatory Education to the Rescue of Girls Facing Early Marriage

The ratification of the 2004 Constitution affirmed a minimum age of eighteen years for both women and men entering marriage in Morocco. There remains however, the disputed clause 20, a conduit to circumvent the spirit of the law for those judges who still sanction the marriage of minors.
ISIS – Center for Women and Development started a consciousness-raising campaign in rural and other marginalised areas of Morocco, where early marriages are still practiced. The 2011 campaign presented the risks – particularly for girls – when entering early marriages. Their education comes to a stop and early pregnancies may present fatal consequences to their health.
The campaign did not lead to the abolition of clause 20. It is still in force and is, according to Souad Slaoui, a prime example of how the letter of the law awards women certain rights but falters when it comes to its practical application. It is nevertheless Souad Slaoui’s impression that the educational aspect of the campaign has had an effect.
“We organised a range of activities, workshops, and educational campaigns. We went into the rural districts and educated families on the serious implications of their choices. Educating parents in these areas is essential due to their patriarchal values and social mores, and the belief that families will lose respect and social standings unless their daughters are married off at an early age. The best thing to do is offering these girls an education. If education were mandatory for all it would not be possible for these girls to drop out of school in order to get married”, says Souad Slaoui.

A Dialogue of Western and Non-Western Feminisms

Souad Slaoui is in Denmark in order to debate the problem of early marriages and the faulty implementation of the family laws due to clause 20. But she is also participating in the conference in Copenhagen in order to participate in the sharing of knowledge she believes to be imperative if we are to understand one another across nationalities, religions, and geographical boundaries. While the specific problems faced by Muslim women are rarely solvable by the application of Western feminist models, Souad Slaoui believes there are lessons to be gleaned from each other. Western and Non-Western feminisms ought not be squared off against one another but should rather uphold a continuous exchange of ideas and experiences.

’We are all fighting for our rights but our rights are embedded in specific socio-cultural contexts which limit our possibilities in different ways. It is important to keep an open mind towards all forms of feminism. There is nothing to be gained from creating a divide between the Islamic and the Western worlds. We only learn about ourselves through international dialogue. In the West there is a widespread stereotype of the women who wear the headscarf, but these views will surely be challenged if you meet such a woman face to face and enter into a dialogue with each other, concludes Souad Slaoui. Such dialogue is precisely one of the primary goals of The Danish Arab Partnership Programme.