Morocco has embarked on a process aimed at loosening the country’s strict abortion law – with the backing of its conservative, religious government. Women’s organizations have long pressed for a liberalization and now it looks like abortion will be legal at least under some circumstances. There’s an estimated 800 clandestine abortions performed in Morocco every day, often at great risk to the health of the mother. 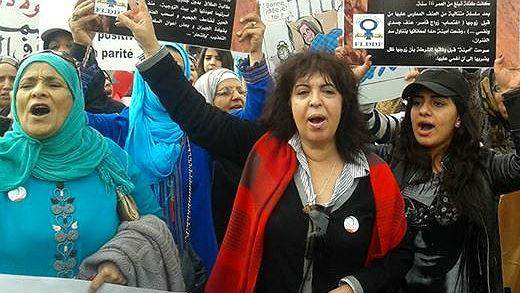 Photo from 8th of March demonstration. Source: facebook page of FLDDF
It all started when Professor Chafik Chraibi, gynecologist and president of the Moroccan Association against Illegal Abortion (AMLAC) and a staunch advocate of the fight against clandestine abortion and unwanted pregnancies was fired from the Rabat maternity hospital for having allowed and participated in a French broadcast on abortion without permission.
The decision – believed to be a social injustice – launched a big wave of solidarity in Morocco, followed by calls for a revision of the law on abortion. Following this popular outrage, Professor Chraibi was brought back to his position as a Head of Department at the hospital, and the discussion on abortion gained momentum.
Aware of the risk of a aggressive demonstrations from both civil society and the population in general, Houcine Louardi, Minister of Health, took the initiative to call for a national debate on the topic while Salaheddine El Othmani, the former Minister of Foreign Affairs and a key figure of the conservative party PJD (Justice and Development Party) showed his support of the reform of the law, but under some conditions.

In the urgency to lead a reflection on this hot issue, AMLAC, in partnership with the Moroccan NGOs Droit & Justice (Law and Justice), and CDSM (the Moroccan Organization for the Right to Health) invited civil society organizations, international organizations, political parties and representatives from the government for a stormy debate that took place at the National Library in Rabat on march 16th.
Professor Chraibi’s argument was that allowing abortion in some cases such as rape and incest would only partially solve the problem, and that Morocco needed to consider a bigger definition of ‘health and well being’ and not only reduce it to the simple physical aspect.
Because it violates the right to life, abortion is considered as a felony punishable by a minimum of 1 and a maximum of 5 years imprisonment for the pregnant woman.
However, if the women are pressed into clandestine abortions, these can also threaten the physical, mental and social health of the woman if practiced in poor hygienic conditions, argued members of civil society organizations who called for the amendment of the article 453 to widen the definition and include social and mental health.

The current law in Morocco only allows abortions in case of a threat to the life or health of the mother. Illegal abortions are punished by between 1 and 5 years in prison for the mother. Doctors performing abortions risk sentences of 20 years.

Most other countries in the Arab world have laws resembling Morocco, and a reform would make it one of the most liberal in the region – only second to Tunisia, which has had access to abortion by request for decades.

KVINFO is involved in partnerships with several of the organizations, which have been driving the debate, including Droit & Justice (Law and Justice) and CDSM (the Moroccan Organization for the Right to Health), although the partnerships are in other fields than their work on sexual and reproductive rights.

The importance of providing appropriate sexual education programs was also stressed by CDSM coordinator Fatima Maghnaoui, who stated that “no coranic text forbids abortion”, a position that was also supported by Ahmed Khamlichi, Director of the Graduate School for Islamic Studies (Dar Al Hadith Al Hassania) who added that around  “800 cases of abortion were practiced in Morocco every day”. Nouzha Skalli, member of the parliament, and former Minister of Social Development, Family and Solidarity also highlighted the social aspect of the problem, instead of considering it a simple medical matter.
The debate on freedom of sexuality as a right was also raised, first by Aicha Ech-chenna, president of the Moroccan NGO Women Solidarity (ASF) who accused the politicians of hypocrisy and who stated that stopping sexual relationships is not a solution in a society where young girls, who find themselves pregnant have no financial resources or family support.
According to Professor Chraibi, this debate was “an extraordinary opportunity to change things”.

The discussion escalated until Professor Chraibi in the middle of the debate received breaking news: A call informing him that King Mohammed VI had just received the Ministers of Justice, Islamic Affairs, and the President of the National Council on Human Rights to think about a proposition of a reformed law, a proposal this commission has to present in a few weeks. The King will then issue an amending decree (Dahir) to the Penal Code.
The King holds the final religious and legal authority in Morocco and his decision has started the official process to reform of the five decades old abortion law. What’s surprising is that several key figures in the ruling conservative party has supported a reform, considering that the government saw large crowds protesting its anti-women policies on International Women’s Day on March 8th.
Even though Health Minister Houcine Louardi was the one to fire professor Chraibi in the first place he has since shown a very flexible position, and called for a revision that takes into account religious, legal, medical, ethical, and social aspects.

“As a doctor and a government minister, I say it’s not reasonable to keep” the existing laws, he has said to Bloomberg News. “Doctors, legislators and clerics must sit and talk.”
Whether the reform will go as far as considering social reasons like the bleak outlook for unmarried mothers is uncertain, but even just legalizing abortion in cases of rape, incest or birth defects would be a huge step forward.
The road is still long, but this debate is a historical first step toward breaking the social, religious and cultural taboo of abortion in Morocco