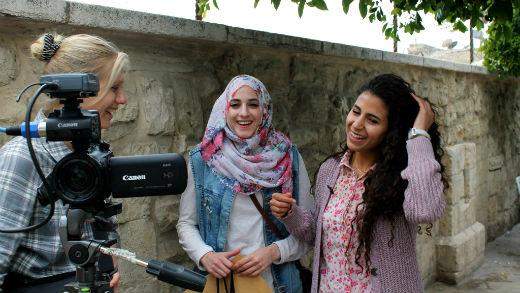 Two new projects have received grants from KVINFO’s Pool for Dialogue and Cooperation on Gender and Women’s Rights – also called the Mini Pool. One of the projects aims to prevent gender based violence in Hebron in the Palestinian Territories. The other educates youth in digital story telling about gender and women’s rights in Jordan.
It’s the fairly new organization Danish Palestinian Women’s Organization which is behind the project in Hebron in cooperation with the local Aman Society Center for counseling, Development and Community Health.
The situation in Hebron with at very feelable Israeli occupation and widespread poverty and unemployment has put the families under a lot of pressure – a pressure that all too often results in violence. The project will educatehe participants about women’s rights and how to solve conflicts without violence.
The project is distinguished by the fact that it is aimed not only at women but also at men, who are often the ones exercising the violence.  Furthermore there’s also a program for children with a number of activities aimed at stopping aggressive behaviour and preventing them from merely copying the adult’s relationship between the genders.
In Jordan, Digital Story Lab has developed the project “Challenge my Story” in cooperation with the Jordanian organizations 7iber, Zarqa Community Development Committee and Al Balad Theatre. The project will educate a number of young people in digital storytelling and use it to strengthen the public debate about gender and women’s rights. Aside from producing concrete stories from the participant’s daily life, the project aims to develop a model for the use of personal, digitally narrated stories in the gender debate.
For Digital Story Lab it is their second project financed by the pool. Last year they got a grant to produce a number of interesting videos with participants in last year’s Palestine Marathon about their aims and impressions participating in the unique contest.
The Mini Pool grants a total of 1,5 million Danish Kroner a year for projects focusing on gender and dialogue, and is funded by the Danish Ministry of Foreign Affairs under their Danish Arab Partnership Program.  The projects are carried out as cooperations between Danish and Arab organizations.