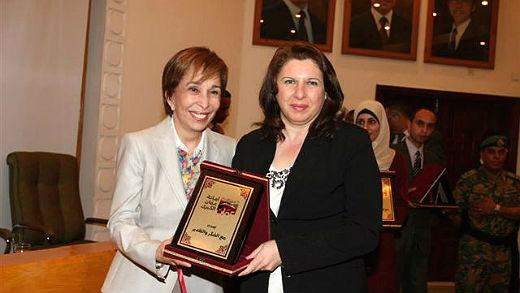 One of KVINFO’s partners in Jordan was among the women who were officially honoured on the international womens day. Manal Sweidan is head of the Gender Statistics Division in the Department of Statistics Jordan and she received the award from Princess Basma, who is the sister of the current king’s father.
Manal Sweidan is the anchor woman in the cooperation Department of Statistics Jordan has with Statistics Denmark and the Higher Population Council in Jordan in order to develop and utilize gender specific statistical data.
The honour is an appreciaton of all the efforts that she has exerted in  establishing the Gender statistics division and in making gender statistics available to enhance policy formulation for reducing the inequality between the sexes.
Manal Sweidan was selected to receive the honour as one of 60 pioneers in gender and women’s empowerment in Jordan. It was awarded for the first time this year.
“ This honour means a lot to me because it expresses the gratitude of our Royal family in Jordan for what the Jordanian women have attained in different walks of life side by side with men,” she writes in her reaction to the award.