The streets of Egypt are my streets too

Combatting sexual violence is top of the agenda for a new generation of Egyptian feminists. 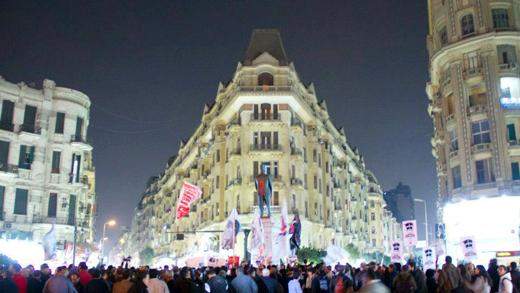 Facts on sexual violenca in Egypt

Read about OpAntiSH at Wikipedia
OpAntiSH is also present at Facebook and Twitter
A report by the Thomson Reuters Foundations shows that Egypt is the country in the Middle East where the plight of women is worst. This is the conclusion of a new study conducted by the foundation, which questioned 330 gender experts and researchers in 22 Arab countries.
Visit Women Memory Forum
Read about the work of the Women Memory Forum in WoMen Dialougue
Visit the Harassmaps site
Read about Harassmap in WoMen Dialogue

Enough is enough for Activist Mariam Kirollos; no longer will she turn a blind eye to being sexually harassed in the streets of Egypt.
“The last time one of those idiots started bothering me, I got so infuriated that I took of one of my shoes and I began hammering it on his taxi while I shouted and screamed. He immediately sped off with me running after him. Those types are always cowards,” tells Mariam Kirollos. She works for the grassroots organisation OpAntiSH [Operation Anti-Sexual Harassment/Assault, ed.], which is working to prevent sexual violence and rape in Cairo
“If I have my purse stolen, people will bend over backwards to help me; if somebody attempts to rape, me people will just walk by. Their attitude is that it’s the women’s own fault and that she’s brought it on herself,” explains Mariam Kirollos. She is currently organising a group of activists who are working to stem the tide of sexual attacks that have been on the increase at mass demonstrations in Cairo over the past few years.
“We need to take action or else we’ll just end up sitting at home. And that’s something I can’t go along with. The streets of Cairo are my streets too.”

A threat to women’s freedom of movement

The chaotic political situation in Egypt has led to a rise in the number of rapes and incidences of sexual harassment in general. In a November 2013 report from Thomas Reuters which examined the situation for women in the Arab world, Egypt was ranked last out of the 22 nations surveyed – not least because of the increasing levels of sexual harassment and violence in the country.
“Women’s freedom of movement in Egypt is under threat. Over the course of the last decade, we’ve been witnessing a steady increase in the incidents of violence and harassment on the streets of Cairo. But since the revolution, these numbers have soared,” tells Hind Ahmed Zaki, who is currently writing a PhD at The University of Washington which focusses on the political participation of women in the Middle East.
“I’ve got female friends who no longer dare to venture out into the street. It’s also an issue of women’s access to education, the labour market and political life. At the moment, I’m heading a project where we educate young women and men about feminism and gender awareness. However, it’s still difficult to convince parents to let their children travel to Cairo alone,” continues Hind Ahmed Zaki, who sees the increase in sexual violence as a terrible consequence of women’s increasing participation in the labour market and in political life.
“We used to live in a society where women kept themselves to the private sphere and where the public sphere was completely dominated by men. Over the past decades this tradition has been changing – the most visible example of this being the huge number of women protesters who have taken to Tahrir Square. The change is a positive one, but it’s not happening without opposition and resistance. One of the worst symptoms of this is the increase in sexual violence. It’s become culturally acceptable to subject women to sexual harassment. It’s become a way of saying ‘get out of the public space’,” explains Hind Ahmed Zaki.

Violence as a political weapon

The general attitude has deteriorated significantly as a result of the repeated cases of rape that have been committed during the large demonstrations around Tahrir Square. Here, again and again, it has been documented that women protesters risk being sexually attacked and raped.
“We call this ‘circles of hell’ – women protesters are caught up in the middle of a circle of onlookers which just gets bigger and bigger. Some of these onlookers try to come to the aid of the women, but the majority exacerbate the situation or try to catch a glimpse of the woman’s body,” tells Mariam Kirollos from OpAntiSH
Hala Kamal believes that these cases represent organised political violence.  She is head of Women and Memory Forum, an academic-led NGO that collects eyewitness accounts from women protesters from Tahrir Square.
“In the past it was the case that women would be used in demonstrations to prevent violence. We were used as a shield because we knew that the police would never touch women. Today, the situation is quite the opposite. Attacks on women are used tactically to weaken the opposition to the regime. The police don’t intervene when women are attacked, and this lack of intervention sends out a powerful message that sexual attacks are okay,” explains Hala Kamal.
It has been almost impossible to get the Egyptian courts to take up cases of rape, and the police refuse to investigate such cases. To the frustration of those fighting for the cause of women, these rapes have been used in the media to weaken the reputation of the protesters.
“The papers end up writing that the rape victim was a prostitute and that the demonstration was an orgy for immoral men and women. By doing so, these incidents of rape are used to undermine the legitimacy of the protests,” tells Mariam Kirollos.

Taking on the role of bodyguards

At OpAntiSH they have completely given up trying to bring these cases through the legal system; instead, they now organise direct resistance during the protests themselves. Wearing multiple layers of clothing, OpAntiSH activists try to force their way through the crowds if they hear that a women is being attacked. Once they succeed in rescuing the woman, they can provide her with a change of clothing and offer her medical assistance.
“I heard that a woman was being attacked, so I tried to push my way through the crowds along with other activists. But suddenly one of the other activists was caught up by the crowds and led away,” recounts Ahmed Zein, one of the few male activists at OpAntiSH.
“When I finally reached the woman, I was pushed back two or three times before I could get hold of her. I was shocked that nobody was letting me help her and appalled that these men could behave so insanely.”
The 27-year-old student started at OpAntiSH out of a desire to protect women, but today Ahmed Zein’s attitude has changed.
“In the past, I had a more traditional way of thinking. But after having been part of the group for some time I’ve really learned a lot about how strong women actually are. My female activist colleagues are just as courageous and brave as I am,” explains Ahmed Zein, who believes that many male activists share a deep-rooted feeling of powerlessness.
“After each of the big demonstrations, we literally had to hold therapy sessions where we could talk about our experiences. Both men and women were in tears. I think that we were all shocked by the fact that such things could be taking place in our country,” tells Ahmed Zein. Nevertheless, he does not agree that the risk for women activists is too great, nor does he agree that women should stay away from the large demonstrations.
“There are many men who say these things to me, but I don’t agree. Having women in the public space is part of the spirit of revolution.”

One of OpAntiSH’s partners is the group Harassmap, which was set up just prior to the revolution. Harassmap’s original objective was to document where the majority of incidents of sexual harassment were taking place by encouraging women to report in whenever they were subjected to harassment in their daily lives. All accounts were recorded on a map that was accessible on the Internet. Today, however, Harassmap is not satisfied with merely registering the number of sexual attacks – they also want to change attitudes within Egyptian society.
“We use all of the information that we receive to challenge some of the prejudices that you hear in Egyptian society, such as ‘its’ only young women who get raped’, or that ‘it’s particularly women who wear provocative clothing who are attacked’. Also, we’ve documented that these attacks are not only carried out by poor young men but that attackers come from all levels of society and all age groups,” explains Nora Finkelman. She believes that the fight against sexual violence has rekindled an interest in the plight of Egyptian women.

“Whereas women’s organisations previously focussed on domestic violence, this issue has now been taken up by the younger generation. We have 700 volunteers and are represented in 17 Egyptian provinces. The young women are becoming more and more aware that these sorts of attacks are unacceptable. And above all, they’re learning to understand they are not the ones at fault here.”
At Harassmap, attempts are being made to change the attitudes within Egyptian society through specific street-level campaigns. Equipped with the latest results from Harassmap and information about the scope and nature of sexual harassment, volunteers take to the streets to engage with men and talk to them about the subject.
“The Egyptian street scene is one filled with men selling bananas, serving tea, or just hanging out. It’s the attitudes of these men that we want to change because if they intervene when a woman is being sexually harassed we’ve come a long way,” explains an optimistic Nora Finkelman, who goes on to conclude:
“Remember, this trend towards sexual harassment is a new phenomenon in Egypt, and it’s for this reason that there’s hope that it will disappear again.”