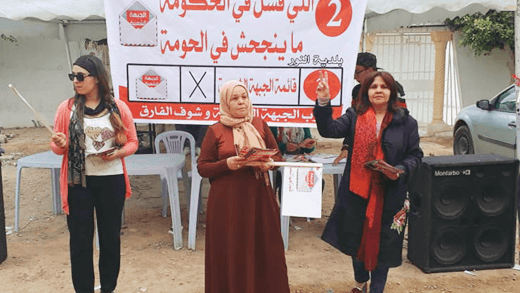 KVINFO’s partner in Tunisia, LET (Ligue des Électrices Tunisiennes), monitored the elections and has verified this landslide victory for women.

As part of our partnership, LET has been the driver of campaigns to inform Tunisian women of their right to stand for election and has trained 400 candidates and observed the election from an equality perspective.

With this result, Tunisian women are better represented in local councils than Danish women are in Danish councils.

The reason for this astonishing result is the new Tunisian election laws that ensure that women and men must be listed equally and in equal numbers on the election lists. The lists must have both vertical and horizontal parity. Vertical parity is not unheard of in the Arab countries, but horizontal parity is a novelty – meaning that there must be an equal number of female and male top candidates.

UN Women’s coverage of the good results for women in the Tunisian elections.

The photograph is from Hayet Hlimi’s (to the right in the picture) election campaign. She is one of the candidates who was trained by LET in partnership with KVINFO. As lead candidate on her list she was elected to the city council in the provincial town Kasserine.