War and Conflict in Yemen – Why the Focus on Gender?

Men, women, and not least children are affected by war. Men are primarily those who fight and possibly get killed in combat, while women and children are victims. Or is that really the case? Gender research demonstrates how war transforms our understandings of gender. We take a closer look at the current conflict in Yemen – and at the meaning of gender during the increasingly tense situation in the country. 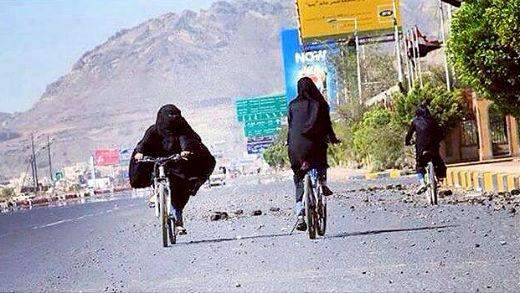 During recent months, an Arab coalition fronted by Saudi Arabia has bombed military installations and camps under the control of the alliance between Yemen’s Houthi movement and the former president and dictator, Ali Abdullah Saleh. The Houthis primarily belong to a Shi’a variant originating in northern Yemen, and they are known in Yemen and abroad for being very conservative in their understanding and practice of gender.
War and its concomitant deprivation, worries, and distress has thus made itself felt in the daily life of the population in Yemen. KVINFO’s partners have recently reported on the situation:
“The last explosion a few days ago caused so much destruction to homes and factories, including my parent’s home. I happened to be there at the time, it was as if an earthquake struck us, broken windowpanes were strewn everywhere. Luckily, we were not injured. We were very lucky, other were less fortunate. My parents have now come to live in my home, until we see the end of this nightmare”, says Bilkis Zabara, the director of the Gender-Development Research and Studies Centre at Sana’a University.
Reports from the current situation in Sana’a reveal that not merely women and children but the entire population is affected.
Sabria Al-Thawr, a PhD student at Roskilde University residing in Yemen explained in May how war affects daily life:
“The situation is rapidly declining. This is the fifth night without electricity in the entire country, while our wealthy neighbours are generously illuminating the night sky with bombs and missiles. In order to preserve petrol, we try to limit running the generators to 30 minutes a day. But 20 litres of petrol cost 150 USD in Sana’a, and there are long queues at the filling stations. One person employs 2-3 days in order to source 40 litres of petrol. We also lack water, and children and women queue in front of the mosques hoping to obtain some of their water. We have neither wheat flour nor bread, only winding queues in front of the bakeries. We honestly do not know how long we can keep this up. The hospitals suffer the most, and the Ministry of Health has just published an appeal for aid in order to prevent the looming humanitarian crisis.”

In the year 2000, the United Nations Security Council declared, in Resolution 1325, that women must be protected against violence during wars and be included as equal partners to men during peace processes after the cessation of war. Most countries are binding signatories of this document
So why is it still relevant to focus on gender and gender differences with regards to the conditions and causes of war, 15 years after the ratification of the resolution? Gender research on international conflicts suggest that war itself is a gendered phenomenon. Indeed, the message is that wars would most likely not occur without the existence of gender differentiation.
The personal testimonies above stem from a situation of more than four years of crisis in Yemen. Like other countries in the Middle East, Yemen has witnessed its very own Arab Spring – albeit a process, which saw the resignation of the previous president and the failure of the subsequent national dialogue. And the Houthi movement, a partner in the dialogue process, has resorted to force in order to realise their political demands, taking over the entire country in the process. The interim president, Abd Rabbo Mansur Hadi, has appealed for help from the neighbouring Arab countries who have been launching air strikes against Houthi positions and strongholds for the fourth consecutive month. It is well-nigh impossible to imagine a greater contrast to the spirit and optimism of the popular uprising.

Even the harsh realities of war offer surprising opportunities for women. The petrol shortage has led some women, as depicted in the photo above, to mount bicycles – something, which would have been unheard of only a few weeks ago – thereby conquering yet another domain in public space. The photo is from facebook.

Women’s participation in the popular uprising in Yemen has been prominent from the very beginning. Scores of women have marched through the cities of Yemen carrying banners and the Yemeni flag draped on their heads or around their shoulders. Seeing as women in the cities of Yemen are most commonly dressed head to toe in black robes, the uprising has shown the world that a fully-covered Muslim woman is not necessarily neither voiceless nor subservient. On the contrary, the demonstrating women in Yemen have been exceedingly loud during rallies and demonstrations, joining the popular call for the fall of the regime. The Yemeni women’s participation in the popular uprising against corruption and repression culminated with the awarding of the Nobel Peace Prize to one of the most prominent women of the uprising, journalist and member of the Islamist Reform Party in Yemen, Tawakkol Karman.
As prominently and admirably as women have participated in demonstrations, marches, rallies, and sit-ins in the capitol, Sana’a’s “Change Square”, the response from the authorities and the political counterparts in the form of retribution and violence against women has been equally fierce. The former Yemeni president gave a speech, prior to being forced to resign, attempting to scare the women out of the uprising by calling their public participation in demonstrations both inappropriate and shameful. Subsequently, a group of women demonstrators were physically assaulted and beaten up – by men.
Bushra Al-Maqtari, a young Yemeni novelist and poet, has blogged about her reactions to the government forces’ attack on demonstrators. She wrote: “Allah is not present here…” And while the protests are still taking place in her hometown, Taiz, the all-male Council of Islamic Clerics in Yemen issued a fatwa against her. The fatwa denounces her as an apostate, essentially offering a carte blanche to any would-be assassin. Luckily, she has remained unharmed so far.

Women Are Active Participants in War

The myth of women primarily being weak and non-active during times of war is often employed in order to ridicule the men who find themselves fighting against women, or the men who are apparently more reticent about active warfare than the women in question. 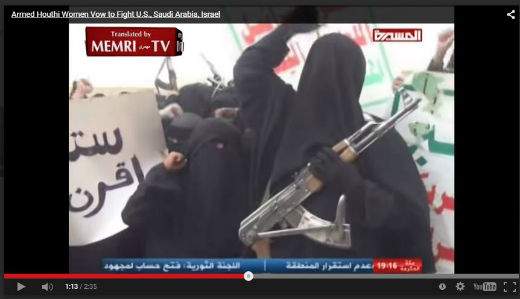 A video on YouTube shows hundreds of women dressed in black baltos, (the traditional cloak covering women from head to toe in Yemen, transl.), and carrying Kalashnikov rifles, while yelling the slogan of the Houthi movement, a loan from the Iranian revolution, in unison: “Allah is great, death to America, death to Israel, Allah curse the Jews, victory to Islam!”. To further underscore the point, one of the female Houthi militants faces the camera while declaring the women willing to replace any man in Yemen, who is unwilling to join the struggle against the imperialist Saudis!
The Saudi-led coalition continues their bombing raids, which people are increasingly viewing as an aggression against the Yemeni population rather than against the Houthis and their seizure of power in Yemen. When women find themselves in the midst of a conflict, by actively identifying the enemy they become participants rather than mere neutral victims. Women’s rights activist and professor at Sana’a University, Husnia Al-Kadri, lists the primary enemies of Yemen. According to her, Yemen’s big brother to the north has repeatedly made its influence felt in Yemen, something which has rarely been for the benefit of Yemen. Husnia Al-Kadri calls Saudi Arabia Yemen’s enemy number one:
”- throughout history, Saudi Arabia has attempted to humiliate the Yemenis, the Saudis took advantage of our country – whether north or south – and prevented us from investing our resources such as oil etc. In the late 1970s, our schools were invaded by the Saudi who propagated their extremist religious practice, Wahabism, which led to Al-Qaeda and Al-Daesh (the Arabic acronym for Isis, transl.). They are Yemen’s enemy number one…”
Wahabism is no less conservative than the Houthis with regards to gender relations. Perhaps this is the reason for the dearth of references – as opposed to during previous military interventions in Iraq and Afghanistan – to the repression or other forms of distress experienced by women in Yemen, as they are no better off than women in Iraq and Pakistan. On the contrary, to Husnia Al-Kadri, the interim president, Abd Rabbo Mansur Hadi, is Yemen’s enemy number two – ever more unpopular since his appeal to Saudi Arabia and its allies to bomb Houthi positions in Yemen – with expected civilian casualties:
”- our enemy number two is the president, whom the Yemenis entrusted with the task of steering Yemen peacefully through the transition phase. He has no place in the new Yemen.”

Connie Carøe Christiansen is programme advisor and researcher at KVINFO, where one of her responsibilities is the coordination of the master programme. She was previously employed at Roskilde University where she developed the project in collaboration with GDRSC.

Quotations from KVINFO’s partners appear with their permission.

Husnia Al-Kadri, who is establishing a master programme in international development and gender in cooperation with Roskilde University and KVINFO, offers this example:
”It should come as no surprise that women are not neutral but partners in war, even if they are engaged in actual combat. Recent reports from Aden, Yemen’s southernmost city, suggest that women are now recruited by the local militias fighting against the Houthis in Aden.”
These observations are corroborated by the American researcher, Laura Sjoberg, who demonstrates how women contribute to and participate in political violence, which destabilises gender hierarchies. At the same time, women’s participation contribute to the impression that the society in question is on the brink of collapse. The appearance of female militants in the militias of Aden is undoubtedly merely one occasion among many that would further the impression of an impending cataclysm.
Not Merely Peacemakers
Women are active participants during a time of war. And while it is important to keep in mind the suffering and deprivation of women, women are neither merely peacemakers nor victims during wartime as UN Resolution 1325 would have us believe.

War creates enemies for women as well as men, and both genders are actively engaged in creating the frustration and aggression, which nourishes war and violence, e.g. by calling upon the hyper-masculinities, which are generally in demand on both sides of a conflict. Gender is thus an integral aspect of war and warfare in Yemen and elsewhere.