Women insist on participation in Yemen 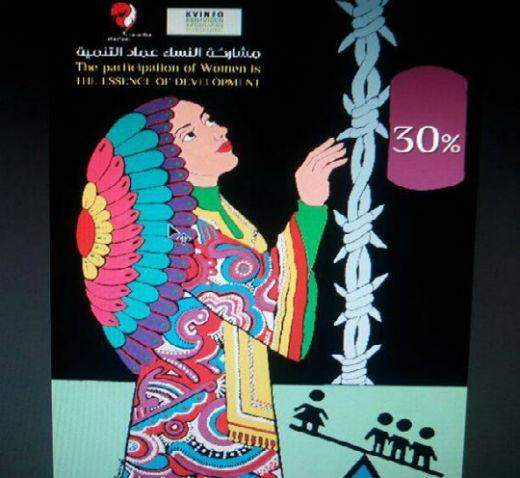 When KVINFO’s partner in Yemen, Awam Foundation for Development and Culture (AFDC), next week conclude their nationwide series of workshops in the capital Sana’a they have much reason to celebrate themselves and their results.
The workshops are part of a work to strengthen the voice of women in Yemen. In spite of grave political turmoil and an outright coup d’etat AFDC succeeded in not only conducting all five regional workshops as planned but also to establish local networks to advocate for women in four of the five provinces.
Together 407 people attended the five workshops, and that was more than AFDC had planned for. On the contrary they had feared that the restive political situation in Yemen would have made people stay away.
“So I can say the attendance was surprising for us in spite of the unsettled situation”, AFDC’s director Bilqis Abu-Osba writes in her report to KVINFO. In the weeks leading up to the workshops, the so-called Houthi militia had occupied the presidential palace and the parliament and on February 6th they appointed their own president and government in a coup d’etat.  Other parties and armed groups have rejected the Houthi government and Yemen is once again on the brink of civil war.
In spite of this only the workshop in the southern town of Hadramut was negatively impacted by the events and had fewer people attending than expected, ending without any concrete results. The workshop took place in the chaotic days just after the coup and in an area which is in strong opposition to the Houthis.
The rest of the workshops were well attended by a broad section of local societies. Official representatives, activists and civil society organizations, religious men and ordinary housewives were among the participants. About two thirds of them were women. The broad attendance is testimony to the commitment of the Yemeni women and their organizations to a more democratic future with participation for all, in spite of the unsettled situation.
On top of the many participants and the establishment of local networks, the workshops also received much attention from local media which have brought no less than 24 articles, TV reports and blog posts about the five workshops.
Read an interview from KVINFOs Web Magazine with AFDC’s leader Bilqis Abu-Osba about the fight for influence for the Yemeni women (November 2014)