While public debates in Denmark often focus on the need to reform Islam as the only solution to meeting the challenges of integration, a new PhD dissertation by Monique Hocke demonstrates how a group of young Muslim women are galvanised to active civic participation in Denmark by their faith. 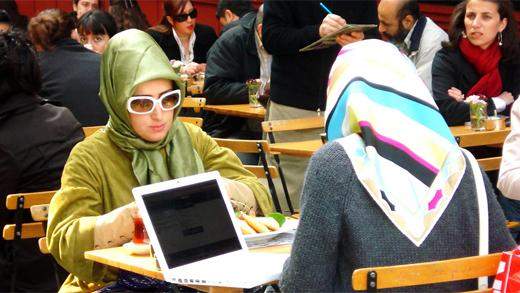 They wear the hijab (headscarf which covers the hair, Transl.), they observe Ramadan (the annual month of fasting for Muslims, Transl.), they eat neither pork nor do they drink alcohol. They consider themselves observant Muslims, living in accordance with the rules and regulations prescribed by Islam. Their entire being is motivated by the desire to be closer to God. They are young, Danish Muslims, they are women, and they represent a rarely heard segment of the population.
And that is a shame, according to Monique Hockes whose PhD dissertation from the Department of Culture and Identity at Roskilde University examines the self awareness and religious practices of ten Muslim women living in Denmark. The dissertation entitled Narratives of Piety – An Analysis of the Formation of Moral Selves among Young Muslim Women in Denmark concludes that it is due to the women’s practice of Islam that they aspire to integration and civic participation in Danish society. This finding is at odds with common perceptions of pious, observant Muslims in Denmark.

’Narratives of Piety’ – An Analysis of the formation of moral selves among young muslim women in Denmark’ by Monique Hocke. Department of Culture and Identity, Roskilde University

”In public debates it is often argued that observant Muslims are rarely well-integrated in Danish society. This position is proved wrong by my interviews,” explains Monique Hocke, a sociologist of religion who has studied observant Muslim women for a number of years.
Her study is based on interviews with ten women aged between 16-31 who are all taking part in so-called ‘Islamic revival”, practising what they consider a ‘pure’ or ‘true’ form of Islam.
It is a practice which hails from the modern Salafiyyah reform movement which dates to late 19th century Egypt. The Muslim Brotherhood is considered the main expression of the movement. The reform movement proposes a return to ‘true’ Islam and its foundational texts, the Qur’an and the Hadith, which are the teachings, deeds, and sayings attributed to the prophet Muhammad. Monique Hocke has met the women in two Islamic youth organisations, whose members identify with this interpretation of Islam.

The women interviewed are all born in Denmark by immigrant parents and their Islamic practice is expressed visually by wearing the hijab and in some cases also the jilbab – the long and lose-fitting garment, which they believe fulfills the Qur’anic injunction for women to cover themselves.
The question of the covered Muslim women is a central trope in the debate on whether Islam is compatible with western ideals of democracy and equality. It is thus a widely believed that a woman who wears the hijab, or is otherwise covered up, is an oppressed woman – whether she personally recognises her oppression or not. The woman is considered doubly oppressed, because she submits herself to male dominance as well as religious decree, which are both seen as difficult to reconcile with the values of secular societies.
”Observant Muslims are at odds with secular society. And the women in particular are understood to occupy a position as subjected to male dominance. Western-oriented feminists find it difficult to comprehend their submission to God and husband. And certain forms of research has also placed them in a position devoid of any form of personal agency,” explains Monique Hocke.
The women interviewed by Monique Hocke are well-educated women who work outside the home. They are, in other words, capable middle-class women, educated in the Danish school system. While they consider themselves to be strong, independent women, they are however, often faced with other people’s notion of female oppression.
”Their attempts to present themselves as non-oppressed remain unrecognised,” explains Monique Hocke.
Often, the women are told that they simply are not aware of their own oppression.
Public debate on Muslims in Denmark is usually played out between the twin forces of the so-called well-integrated Muslims as opposed to extremist, radicalised Muslims. It is widely believed that well-integrated Muslims abstain from wearing the hijab and presenting themselves as observant Muslims.
At the other end of the spectrum, one finds the literal Qur’anic reading of extremist Muslims. The women interviewed by Monique Hocke fall somewhere in the middle between these two positions. However, due to the visibility of their faith practices, they are often considered intolerant, ‘too religious’, and difficult to integrate.
”In Denmark, one seeks to engage with a certain kind of Muslim – the Muslims accepted as integrated citizens are often the Muslims who do not display their religion in public,” explains Monique Hocke.

The individual relationship with God is central to the women interviewed. Their final destination is a reformation of the self in order to achieve salvation in the hereafter. While this is neither a feminist nor a liberating project to the women, they often find themselves arguing for the right to move freely, pursue education, and work outside the home.
Monique Hocke relates the example of a woman whose husband decides to travel to the Middle East in order to complete a six-week Arabic language course. Initially, the woman disapproves since she will be left with sole responsibility to care for their two children. According to her understanding of Islam, the husband, as head of the family, is entitled to make the final decision. Hence, she accepts his decision to travel, not least because it is in pursuit of ‘knowledge’ – something, which is regarded highly within Islam. The woman thus employs an Islamic form of reasoning in order to justify her husband’s actions. The husband leaves, and during his six-week absence the woman discovers that she is capable of managing on her own without his help.
”This contributes to an increase in the woman’s personal authority. The fact that she has subjected herself to the will of her husband is of less importance – what matters is that she has contributed to the well-being of the family and managed by the grace of God,” explains Monique Hocke.
”One might say that it boils down to the woman’s own process of personal transformation. Something, which other people consider a form of subjugation, she considers to be a transformation. Something akin to personal agency.”

Do you sleep in the hijab?

Regardless of their personal transformative processes, the women are mostly met with the same invariable views in daily life. They are queried about being Muslim. And asked whether their parents arranged their marriage, or if they sleep in the hijab.
”The women consider these questions invasive because it takes them to task on who they are and why they are the way they are,” explains Hocke.
The women are faith-bound to perform da’wa. Understood as ‘inviting to Islam’, da’wa constitutes part of the women’s piety project.
Da’wa entails the distinction between good deeds and non-good deeds, and helping others perform good deeds. And in a Danish context where the women are faced with all sorts of questions concerning their faith practices, da’wa involves making oneself available to any and all questions posed:
”The women consider themselves to be worthy representatives of Islam, something which entails trying to clear any misunderstanding about the religion and meeting all questions with comprehensive answers,” explains Monique Hocke.
The women consider themselves as role models – another expression of their faith practices.
”The women are in a state of continuous self-reflective processes of evaluation. Even a small thing such as littering the street with a banana peel is considered wrong, because they consider themselves as role models to other Muslims as well as the non-Muslim majority population,” explains Monique Hocke.

Hocke describes how influencing Muslims and non-Muslims alike by setting a good example is central to the women’s understanding of self. They are essentially concerned with being good Muslims and setting a good example is a method that brings one closer to God. They engage in dialogue and are active in various activities and voluntary work in order to demonstrate how Muslims are not intolerant people who exclude themselves from society.
”Everything they do is concerned with being a good Muslim. They argue that doing good deeds does a world of wonder to the way they practice Islam. Doing good deeds thus entails the influencing of other through dialogue as well as the construction of their own selves with an eye to obtaining the grace of God.”

While the women are motivated to doing good deeds in order to get closer to God, the endeavour concomitantly leads to active participation in Danish society. Something, which according to Monique Hocke holds great prospects for integration, which remains ignored by institutions and politicians alike. Monique Hocke is puzzled by this:
”One may rightfully ask: Why is the recognition of these women as citizens such a moot point? Why is it so controversial to be a visibly observant Muslim in Denmark?”
English translation by: Maria Zennaro